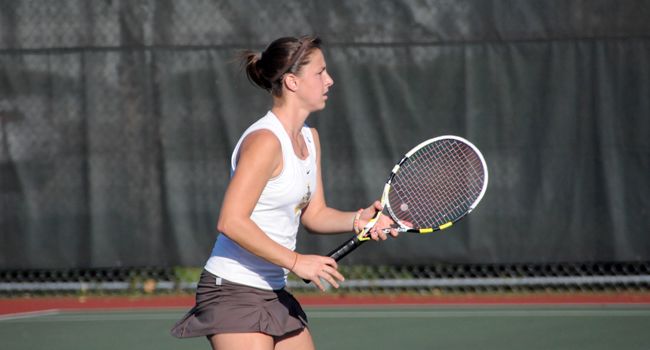 Kaitlyn Hamel went to three sets for the second straight match Saturday afternoon against Bradley. She dropped the tiebreaker set 10-5 to the Braves.
Related Links

The Valpo women's tennis team wrapped up their February with a 7-0 loss at the hands of the Bradley Braves Saturday afternoon.

The Braves won handily in doubles action.  Adele Henke and Corey Mattson won at No. 1 doubles over Kristin Zakiewicz and Michele Fredlake 8-2. Lauren Kammerer and Aubree Zdanovec lost their match at No. 2 doubles by the same score to Kennedy Scott and Carly Miles.  Kaitlyn Hamel and Megan Barthels played out their match at No. 3, coming up short to Elizabeth Przystawski and Sarah Rodefeld 8-5.

Singles play wasn't much kinder to the Crusaders.

Zakiewicz and Hamel forced their opponents to a third set.  However, Przystawski took the tiebreaker against Zakiewicz 10-3 at No. 3 singles, and Miles defeated Hamel 10-5 in the extra set at No. 4 for the clean sweep.

Fredlake managed a game in each set versus Henke at No. 1 singles.

The Bradley Braves are over the .500 mark for the first time this season.  The victory was the team's third straight.