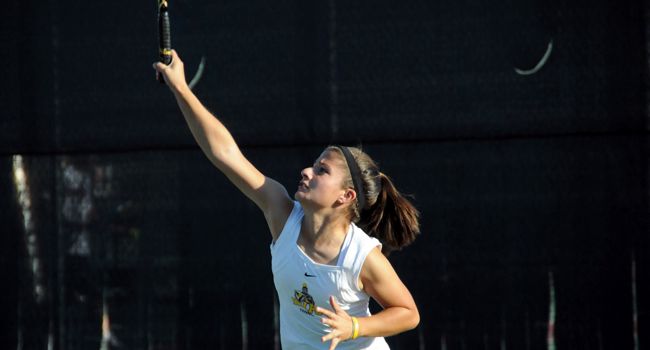 In the second match of their two-game home-stand, the Crusader women welcomed South Dakota to the Courts of NWI. Despite solid play early on from Megan Barthels (Grand Rapids, Mich./Catholic Central) and Paige Heuer (Munster, Ind./Munster) in No.2 doubles, the Crusaders would fall to the Coyotes in a 7-0 decision.

The Coyotes took an early advantage in doubles play, as Rymma Maslova and Yuliya Sidenko were able to defeat Kristin Zakiewicz (Bristol, Ind./Northridge) and Kaitlyn Hamel (Lakewood, Colo./Green Mountain) by a score of 8-2 in No.1 doubles. In No.2 doubles, Barthels and Heuer were able to pull the Crusaders back to level in the match, as the pairing won their match against Yamin Reddy and Milica Pavlovic by an 8-5 decision. Valparaiso was not able to take the point from doubles play however, as the Coyotes were able take No.3 doubles by a score of 8-3.

After taking the point in doubles play, the Coyotes would go onto sweep singles play. Hamel would provide Valparaiso with the closest match of the day in No.1 singles. In tightly contested match, Hamel would eventually drop the point in a 6-4, 6-4 decision. In No.3 singles, the Coyotes’ Dragana Brankovic defeated Heuer 6-2, 6-1, while Zakiewicz and Morgan Paras (Indianapolis, Ind./Bishop Chatard) were each defeated by 6-0, 6-2 score in No.2 and No.6 singles. Neither Barthels or Michelle Fredlake (South Bend, Ind./Saint Joseph’s) were able to overcome the play of their South Dakota opponents in No.4 and No.5 singles, as the Coyotes took both matches 6-2,6-2 and 6-0, 6-0 respectively.

The Crusader women will have a quick turn-around, as the team travels to Milwaukee, Wis. on Saturday morning to take on the Golden Eagles of Marquette. The match is slated for a 6:00 p.m. start.