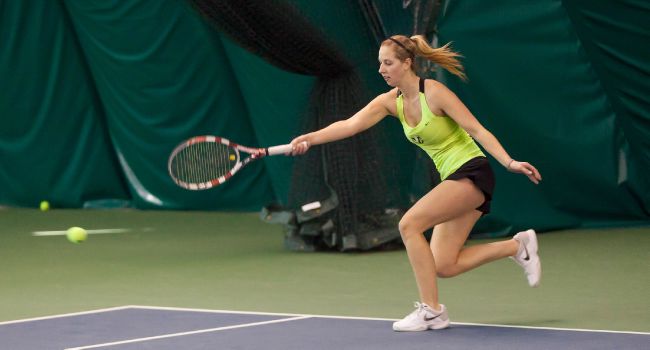 The Valparaiso women’s tennis team played Horizon League leader Cleveland State on Saturday morning. The match, which was the final regular season match for both teams, carried plenty of significance for the final league standings, as Cleveland State needed to win in order clinch the regular season title. The Crusaders looked to play spoiler, but the Vikings were able to prevail with a 7-0 win, ending Valparaiso’s season.

The match started with excitement in the doubles competition with Kristin Zakiewicz (Bristol, Ind./Northridge) and Kaitlyn Hamel (Lakewood, Colo./Green Mountain) taking six games at No.1 doubles. Cleveland State’s Alex Power and Ellen Folkers took the contest, however, with an 8-6 win. The Vikings then went onto win the doubles point with an 8-1 win at No.2 doubles. Paige Heuer (Munster, Ind./Munster) and Megan Barthels (Grand Rapids, Mich./Catholic Central) dropped the No.3 doubles contest, 8-5.

The Vikings kept rolling in the singles competition, taking each contest in straight sets. Hamel, Zakiewicz, and Heuer proved to be tough outs at No.1, No.2, and No.3 singles. The trio of Crusaders were unable to win a point for the Crusaders in their respective contests, however. With the match won, Cleveland State went on to sweep the remaining singles contests 6-2, 6-1 (No.4 singles) 6-0, 6-1 (No.5 singles) and 6-0, 6-3 (No.6 singles).

With the loss, Valparaiso (2-22, 1-7 Horizon) finished eighth in the final Horizon League standings; missing the league tournament. Heuer finished the season as the team leader in singles victories with six total. In doubles, Heuer and Barthels led the team with five total wins. Zakiewicz and Aubree Zdanovec (Appleton, Wis./East) played their last match of their Valparaiso careers on Saturday. The seniors were members of the team responsible for winning the program its first ever Horizon League match.