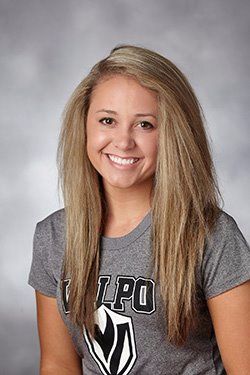 2011-2012: Played 18 singles and nine doubles matches as a junior ... paced the Crusaders with a 3-4 Horizon League singles record ... played number five and number six singles all season ... tallied back-to-back conference wins at Green Bay and Detroit April 1-6 ... led team with career-high six singles wins ... led Valpo with a 3-3 singles record during the fall ... posted a victory in a match tie-break against Green Bay to open the year ... finished the fall with back-to-back singles wins against Dayton and Robert Morris (Ill.).

2009-2010: Competed at second singles for the Crusaders in the spring ... won first collegiate match over spring break against Eckerd in a match tie-break ... played number one singles all fall for the Brown and Gold ... competed with Camill Burden and Abby Wright at number one doubles in the spring ... played doubles at all three positions in the lineup with three different partners in the fall ... made collegiate debut at Wayne State.

Prep: Lettered all four years ... an All-Fox Valley Conference selection as a senior at Green Bay Southwest ... advanced to the state championships in singles ... had a 30-3 record as a senior, winning the sectional title ... went to state in doubles as a sophomore for the Redbirds with sister Jackie ... posted an 11-1 singles mark and earned All-Bay Conference honors during sophomore campaign ... named school’s Rookie of the Year as a freshman at DePere ... won the sectional championship at three singles as a freshman ... a member of National Honor Society.