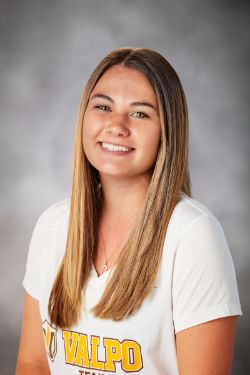 2015-16: Collected seven wins in singles play (second-most on the team), and a team-high 12 victories in No. 1 doubles action alongside Kat Hebble...downed West Virginia State's Nina Dillwald 6-1, 6-1 in the opening match of the season at the Greater Cincinnati Collegiate Invite on Sept. 18th...took down Bowling Green's Drew Fillis (Oct. 3) and Oakland's Elizabeth Guy (Oct. 9) in straight sets in back-to-back tilts...picked up a 6-2, 6-2 triumph over Wright State's Elaine Cloern on Oct. 11th at the Bronco Invitational in Kalamazoo...persevered versus Green Bay's Stephanie Londre 7-6 (9), 6-2 on Apr. 9th...claimed victories in back-to-back doubles matches with Hebble on three separate occasions...enjoyed a 2-1 run in Puerto Rico during a stretch that included victories over the No. 1 tandems from Providence and East Carolina...named to Horizon League Spring Academic Honor Roll.

2014-15: Finished second on the team in singles victories with seven, and tied for the team watermark in doubles wins with eight...scored triumphs in both singles and doubles in her first three matches of the season - Aquinas College (Sept. 20), Davenport University (Sept. 20), and Marian University (Sept. 21)...collected a 6-3, 6-0 victory over Nebraska-Omaha's Rebecca Stafford on Feb. 13th...registered a straight-set win at Arizona Christian (Mar. 3)...battled back for a 4-6, 6-0, 6-1 triumph against Western Illinois (Mar. 21), a match in which she also posted a 6-4 win at No. 2 doubles alongside Cary Milanes...recorded a 6-2, 6-4 victory in No. 4 singles versus Green Bay's Rachael Menos.