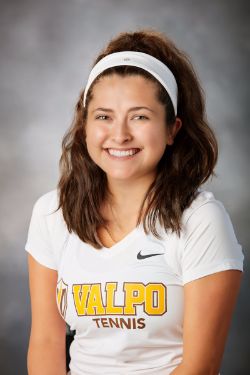 2017-18: Played primarily third singles for the Crusaders... Had seven singles victories and 13 doubles wins on the year... Started the fall by winning each of her first three matches... Teamed with Jordan Kopfer for a first-round doubles win over Evansville in the MVC Individual Championships on Oct. 7... Paired with Randi Wind for a No. 2 doubles victory on April 14 against Missouri State, helping the Crusaders take the doubles point from the opposition for the first time in Missouri Valley Conference play.

2016-17: Picked up six singles victories, including four in dual matches during her sophomore season... Added five wins in doubles activity, three of which came in dual play... Was the last match going on April 14 against Green Bay, pulling out a 7-6(4), 6-1 victory over Olivia Headford to give the Crusaders a 4-3 win, their first Horizon League victory of the season... Won three of her final five singles matches of the season, two of which were in league play... Started at No. 3 singles throughout the year.

Prep: A three-year letter winner for the Trojans...as a senior, she was named First Team All-State, First Team All-District and the Post-Tribune Girls Tennis Player of the Year...named team's Most Valuable Player her sophomore and senior seasons...earned the Scholar-Athlete Award as a freshman, sophomore and senior...was the first tennis player from Chesterton High to advance to the Indiana State Tournament.

Personal: Meg is the daughter of Bob and Julie Modesto...majoring in communications...born Feb. 11, 1997.