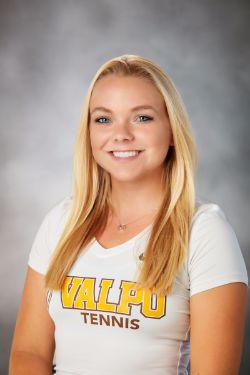 2016-17: Went 3-2 in singles play and had one doubles victory during her sophomore season... Notched her first doubles win of the year on Feb. 24 in a dual match against IUPUI as she and Meg Modesto prevailed at No. 3 doubles to help the Crusaders capture the doubles point... Made one appearance in Horizon League play, competing at No. 3 doubles on March 26 against Cleveland State.

2015-16: Competed in 23 singles matches and 15 doubles contests in her rookie campaign with the Brown and Gold...defeated Morehead State's Maria Orellana 6-4, 6-2 in the season opener at the Greater Cincinnati Collegiate Invite on Sept. 18...downed Davenport's Hannah Murphy 6-1, 6-1 on Oct. 13...gutted out a 6-4, 5-7, 10-5 triumph versus Sacred Heart's Claudia Ruiz in Puerto Rico (March 6)...claimed victories in the first two doubles matches of the season alongside fellow freshman Randi Wind...teamed up with Erin Staal to register a 6-0 shutout of Green Bay's Noel Peck and Stephanie Londre on April 9.

Prep: A four-year letter winner for the Wild...named team MVP for the 2012-13 and 2013-14 seasons...was a four-time All-Conference selection...a two-time state qualifier, the first Wild to do so in 11 years...won third place in the 2014 sectional...named team captain in 2014...was a member of National Honors Society...made the Honor Roll all four years...received science Star of the Month in 2011.

Personal: Halle is the daughter of Michael and Lisa Roach...majoring in meteorology.