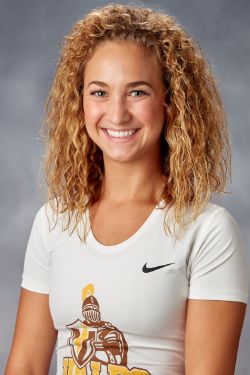 2017-18: Had six singles wins and six doubles victories this season... Singles wins included triumphs over IUPUI and Omaha...  Paired with Meg Modesto for a No. 2 doubles victory on April 14 against Missouri State, helping the Crusaders take the doubles point from the opposition for the first time in Missouri Valley Conference play.

2016-17: Racked up 11 singles victories (seven in dual matches) and three doubles wins (two dual) during her sophomore season... Had singles wins in league play against Green Bay, Milwaukee and Northern Kentucky... Played most of the season at No. 6 singles... Had the most singles wins of any Valpo women's tennis player in the last decade.

2015-16: Competed in a team-high 29 matches in singles play and 26 doubles contests in her rookie season with the Crusaders...recorded her first collegiate victory over Megan Conlin of Lewis University on Sept. 19 by a score of 7-5, 6-2...downed Bowling Green's Leeah Floyd 6-2, 6-3 at the UIC Invite on Oct. 3...dispatched Akron's Carla Flores 6-3, 6-2 at No. 5 singles on Feb. 20...collected a 6-3, 5-7, 10-7 triumph in Puerto Rico versus Lindsey Post of Sacred Heart...rallied for a 3-6, 6-4, 7-5 win over Hailey Shanahan of Northern Kentucky on April 2...defeated Green Bay's Jule-Sophie Hermann 6-4, 7-5 on April 9...was victorious in her first two doubles tilts of the season alongside Halle Roach at the Greater Cincinnati Collegiate Invite (Sept. 18-19)...outlasted Sacred Heart's No. 2 tandem of Paige Olson/Olivia Podsiebierski 7-6 (6) to help Valpo secure a 4-3 victory over the Pioneers on March 6 in Puerto Rico.