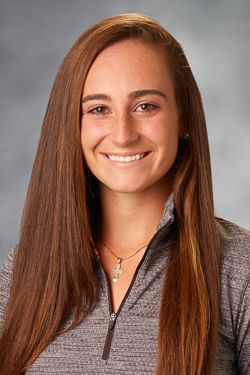 2017-18: Named to the MVC All-Select Team… Owned a 19-6 singles record and a 12-12 mark in doubles activity despite having her season cut short by an injury… Tied for fourth in program history for singles wins in a single season… Finished with a .760 singles winning percentage that ranks sixth in single-season program history… Had the most singles wins a season by any Valpo player since 2006-2007… Reached the championship match of Flight 2 Singles at the MVC Individual Championship in Normal, Ill. on Oct. 9… Won the MVC Doubles Team of the Week award on Feb. 20 alongside Claire Czerwonka after defeating No. 1 doubles teams from Northern Illinois and Lewis… Enjoyed another Doubles Team of the Week distinction on April 3 after she and Czerwonka registered a 6-1 win over Northern Kentucky… Took home MVC Singles Player of the Week honors on March 13 after winning all 12 games of her No. 2 singles match against Chaminade in Honolulu, Hawaii…  Started the season with six straight wins, then had an even longer streak from Feb. 17 to April 4, rapping off seven victories in a row. After falling on Feb. 10, did not lose again until April 7… Enjoyed MVC wins over UNI and Missouri State.

Prep: Entered Valpo as a four-star recruit, according to tennisrecruiting.net... Received first-team all-state singles accolades as a senior... Ranked second in Illinois, seventh in the Great Lakes and 79th nationally... Made an appearance in the state quarterfinals this season... Knocked off a five-star player in the state tournament and made it further than any other player in her school’s history.

Personal: The only left-handed player on Valpo's roster... Was a member of her school's National Honor Society in high school... Received a Scholastic Achievement Award... Enjoys volunteering for various nonprofit organizations... Majoring in nursing.