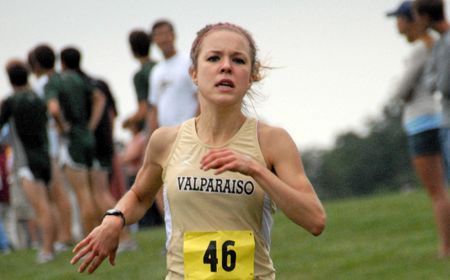 Senior Laura Rolf (Rochester, Mich./Lutheran Northwest) was named the Most Outstanding Running Performer after her second Horizon League Championship record in as many days, while fellow senior Amanda Body (Harlan, Ky./Harlan) set her second school record of the weekend as the Valparaiso women’s track and field squad finished fourth at the Indoor Championships in Greencastle, Ind.

The Crusaders tallied 44 points over the two-day meet to match their 2008 indoor finish.  Milwaukee totaled 165 points to take the team championship.

Body surpassed her own school record in the 200m dash by better than two-tenths of a second, crossing the line in 25.35 seconds en route to a second-place finish.  Body also ran to a fourth-place showing in the 60m dash with a time of 7.87 seconds Sunday, and also tallied a 12th-place finish in the triple jump with a leap of 33’9 ¼”.

Alyssa Bradford (Mukwonago, Wis./Mukwonago) improved four spots Sunday over her qualifying spot in the 800m run, crossing the line in 2:22.08, good for a fourth-place finish.  Windy Santa Cruz (Fall Creek, Wis./Fall Creek) led the Crusaders in the mile run with a season-best time of 5:38.78, while Natalie McCorriston (Lansdowne, Pa./Cardinal O’Hara) paced Valpo with a toss of 35’0 ¼” in the shot put.