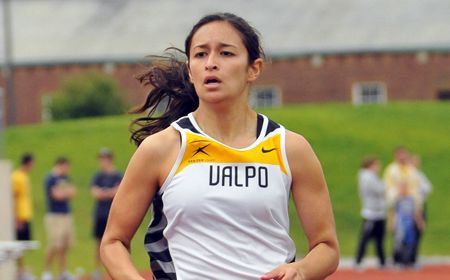 Windy Santa Cruz was one of five Crusaders named to the Academic All-League squads. (John Fetcho)

Junior Jarrett Mickens (Aurora, Ill./Waubonsie Valley) twice was named Horizon League Field Athlete of the Week during the outdoor campaign while posting the second-best marks in Crusader history in both the long and triple jumps.  He posted four event victories combined over the two jumps in 2010 and placed in the top-four in both events at the HL Championships.  A biology major who carries a 3.549 GPA, Mickens also earned Academic All-League honors for the indoor season.

Junior Steve Schubert (Lisle, Ill./Benet Academy) moved into fourth place in Valpo history outdoors in the triple jump while earning five top-four finishes in the event during the outdoor season.  Schubert picked up a pair of top-ten finishes at the HL Championships, placing eighth in the triple jump and tenth in the javelin throw.  A civil engineering major who carries a 3.804 GPA, Schubert also earned Academic All-League honors for the indoor season.

Senior Alyssa Bradford (Mukwonago, Wis./Mukwonago) posted four top-ten finishes in the 800m run during the outdoor season, including a sixth-place showing at the HL Championships with a time that was fifth-fastest in program history.  Bradford, a senior who had a perfect 4.000 GPA in graduate work after posting a 3.975 undergrad GPA, was named a CoSIDA Third Team Academic All-American and earned First Team Academic All-District honors for the second straight year.

Senior Lindsey Gilman (South Bend, Ind./Marian) concentrated on the javelin throw during the outdoor season and peaked at the HL Championships, with her toss of 101’8” being good for a sixth-place finish.  Also a repeat honoree on the First Team Academic All-District squad, Gilman, who carried a 3.976 GPA as a chemistry major, shared the Laurel Award, awarded to Valpo’s senior student-athlete with the highest GPA, with Bradford.