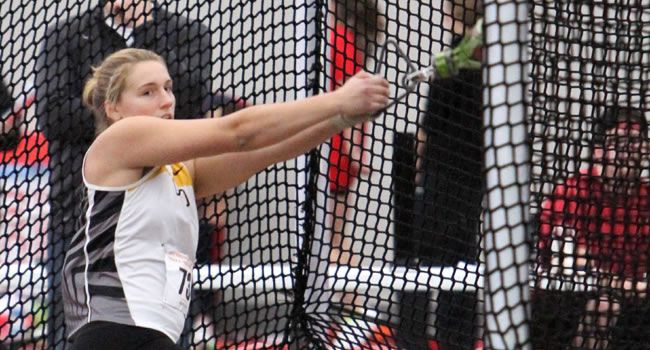 Sarah Drozdowski won titles in the shot put and hammer throw en route to being named the Horizon League Athlete of the Week.

Drozdowski threw season bests in the shot put, hammer throw, and discus over the weekend at the DePauw Outdoor Invitational. She took home the titles in the shot put and hammer throw while also picking up a third place finish in the discus She bested her second-best shot put mark in school history by almost seven inches with a 13.27m/43-6.5 heave, out-distancing the field by over a foot and a half. She would out throw the field by 14 feet in the hammer with her 51.45m/168-9 moonshot. In the discus, she took third with a mark of 37.47m/122-11.

With her efforts from this weekend, she holds the top mark in the Horizon League in the hammer, the second best mark in the shot put, and sixth in the discus while also holding the fifth farthest javelin mark.

Drozdowski picks up her fifth Athlete of the Week award of her career and her first during an outdoor season. She is the second Crusader to pick up the weekly award this outdoor season, joining junior pole vaulter Sarah Peters (Lyons, Township/LaGrange, Ill.), who won the award on March 25.

Valpo will split squads this week with a pair of meets. Some Crusaders will travel to the Tennessee Relays on Thursday through Saturday and others will compete in the Golden Grizzly Duals at Oakland on Saturday. Live results for the Tennessee Relays will be available through ValpoAthletics.com. Full results and recaps will be posted following each day of competition.