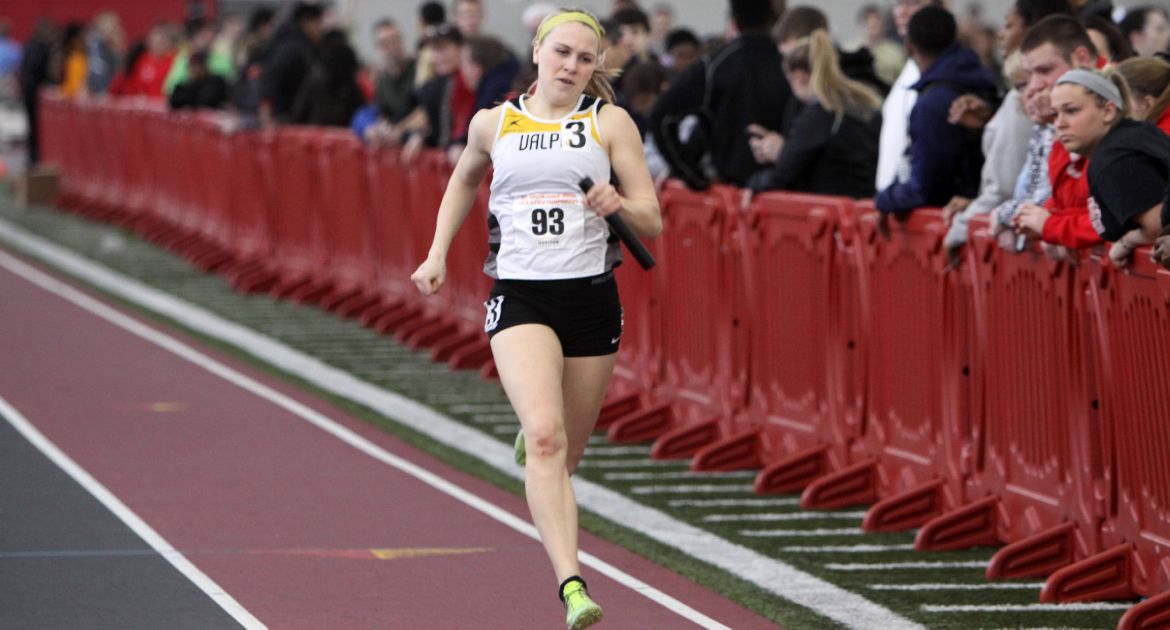 The Valparaiso women’s track and field team needed GPS and computers to keep track of all the meets going on Saturday afternoon. Some Crusaders were finishing up the Tennessee Relays while the rest were competing at the Hillsdale Invitational and the Golden Grizzly Duals.

In an almost déjà vu performance from yesterday, Liz Bloy (Freedom, Wis./Freedom) set the second fastest time in school history in the 3000 meter steeplechase. One day after setting the second best time in the 1,500m run, Bloy would cross the line in 11:03.56 and take ninth place in her first collegiate steeplechase.

Brooke Hinstorff (Waterloo, Wis./Lakeside Lutheran) was the only Crusader to compete at Hillsdale, taking fourth in javelin with a mark of 32.22m/105-8.

In Rochester, Eileen Carmignani (Naperville, Ill./Benet Academy) and Sandra DiPauli (Downers Grove, Ill./North) finished four-five in the steeplechase with times of 13:44.65 and 14:00.70, respectively.

Hannah Schilling (Fraser, Mich./Lutheran North), Janelle Wigal (Chattanooga, Tenn./Chattanooga School for the Arts & Science), and Kelli Wosick (Mount Prospect, Ill./Saint Viator) all recorded season best times in their respective events. Schilling took 11th in the 5000m run with a time of 19:34.73, Wigal crossed the finish in 2:28.81 in the 800m and Wosick sprinted to a wind-aided 13th place finish in 27.61. Wosick also took eighth in the 400m with a time of 1:01.19.

Ann Chapman (Washington, Ill./Washington Community) took sixth in the long jump with her mark of 4.63m/15-1.25.

Valpo heads to the Illini Twilight next weekend, full results and recaps will be available at ValpoAthletics.com.