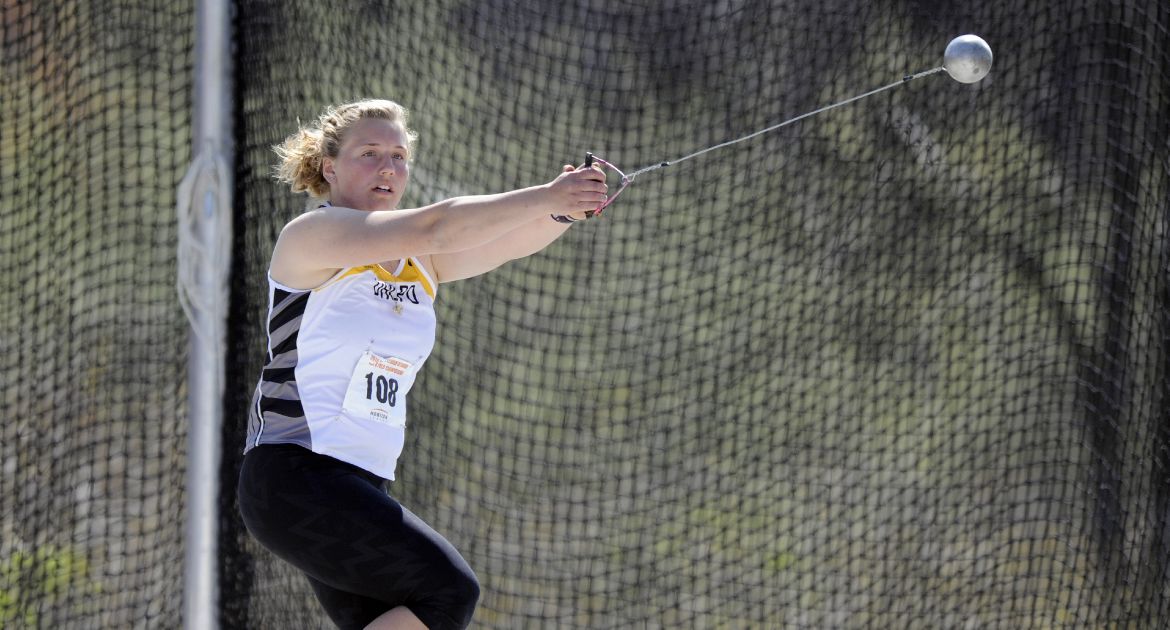 Sarah Drozdowski was honored with Athlete of the Year after claiming the hammer throw title on Sunday.
Related Links

Records were broke, titles were won, and awards were given to several members of the Valparaiso women’s track and field team on Sunday at the Horizon League Outdoor Championship.

Senior Sarah Drozdowski (Roselle, Ill./Lake Park) took home the title in the hammer throw with her toss of 50.20m/164-8, out-distancing the field by over 14 feet. She was named the Athlete of the Year and the Outstanding Field Performer of the Meet for her efforts throughout the weekend.

“Sarah got a huge win in the hammer, head coach Ryan Moore said. “That really helped solidify the Athlete of the Year for her. It was a challenge for her, she didn’t have the best throw and I think the nerves got the best of her. It’s the mark of a champion to figure things out and win when things aren’t going the way you though they would go. It’s a big day for her, five years of hard work. Could not a more deserving athlete, she’s a kid that I’ve been close with over the past five years and I couldn’t be more thrilled for her.”

Freshman Hannah Reynard (Jackson, Mich./Napoleon) finished third in the 400 meter hurdles with a personal best 1:03.63, improving her second best time in school history by four hundredths of a second.

The 4x400m relay of Reynard, Wosick, freshman Allison Baylor (Hudson, Ohio/Hudson) and Bloy took sixth with their time of 4:03.75, the third fastest time in school history.

The Crusaders finished in fifth place with 71 points, their best finish in the league championship since 2008.

“It was a great team effort for the whole group,” Moore added. “It was a big welcoming surprise for them to score as high as they did. Now we have some opportunities for some last chance meets to get some girls into the regionals in a few weeks.