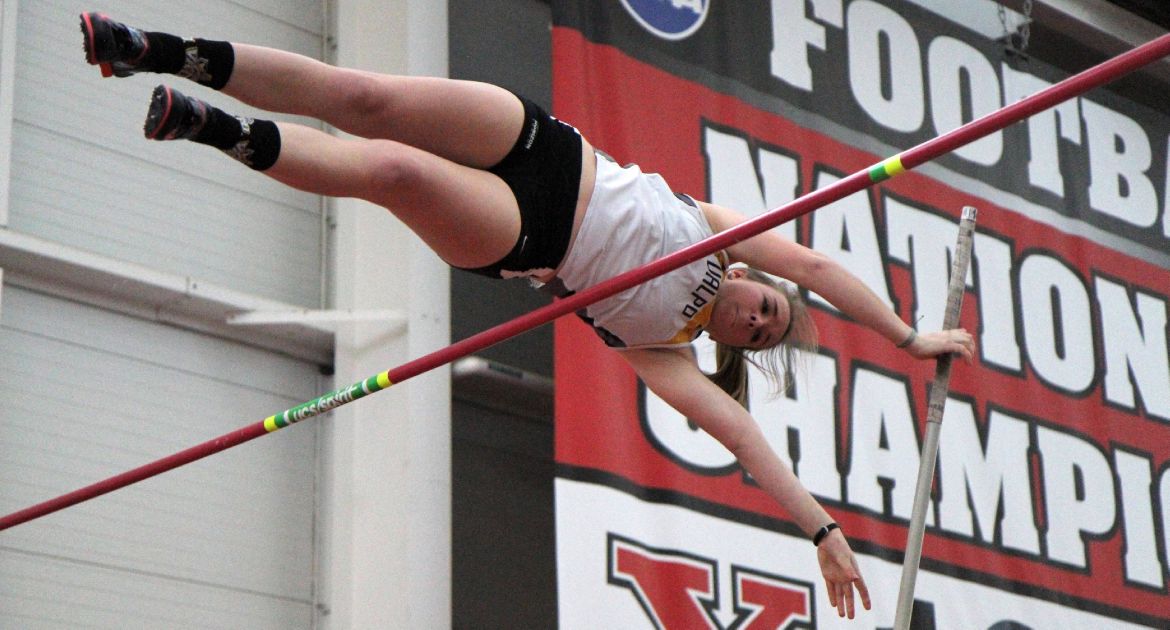 The Crusader men finished the day in second place out of the seven competing points, tallying 41 points on the first day of action and trailing only host Youngstown State. The Valpo women are in eighth place after day one.

On the men’s side, the Crusaders claimed one event win and also set a new program record on Saturday. On the infield, sophomore Alexander Watson earned his way to the top of the podium in the pole vault, clearing 14’11”. Meanwhile, freshman Zachary Topper finished third in the event as well, scoring six points with a mark of 14’7 ¼”.

The track was home to the new program record on Saturday. The Crusader distance medley team of Adam Bruno, Nathan Dotts, Ben Zibricky and Alexander Bruno brought home eight points after finishing second with a final time of 10:06.45. The quartet set a new school record with the effort Saturday, besting by better than nine seconds the previous record set earlier this season.

Elsewhere on the infield for the Valpo men, three Crusaders earned top five finishes in the weight throw. Senior Jacob Smutz led the way with a toss of 65’8 ¼”, picking up eight points with a second-place finish. Sophomore Andrew Guzek (60’8”) and senior Chris Sosnowski (56’11 ½”) finished in fourth and fifth place, respectively, to combine for nine points, while Sosnowski moved into fifth in program history in the event with his PR.

A pair of Crusaders also improved upon PRs that rank among Valpo’s all-time top-five in the 200m dash, as junior Anthony Franze ran a time of 22.42 in the prelims, while junior Juru Lollis posted a time of 22.58 – improving upon their respective times which ranked fourth and fifth in Crusader history. Lollis also qualified for Sunday’s event final in the 60m dash with a time of 7.00 during preliminaries.

On the women’s side, senior Sarah Peters led the way, placing fourth in the pole vault as she cleared 11’3 ¾”, earning five points for the Crusaders. Elsewhere on the infield, freshman Abby Jankowski led Valpo with a mark of 39’0 ½” in the weight throw, while senior Ann Chapman set a new PR with a leap of 16’6” in the long jump.

On the track, the distance medley relay team of Tori Tamburrino, Allison Baylor, Janelle Wigal and Hannah Schilling earned a point for Valpo, finishing with a time of 13:25.09. Junior Elizabeth Bloy advanced to Sunday’s finals of the 800m run after running a 2:16.02 in Saturday morning’s preliminaries, fourth-fastest among all competitors. Senior Cleo Holt paced the Crusaders in the 200m dash with a time of 26.36, while sophomore Kim Heiny set a new PR with a time of 18:14.29 in the 5,000m run.