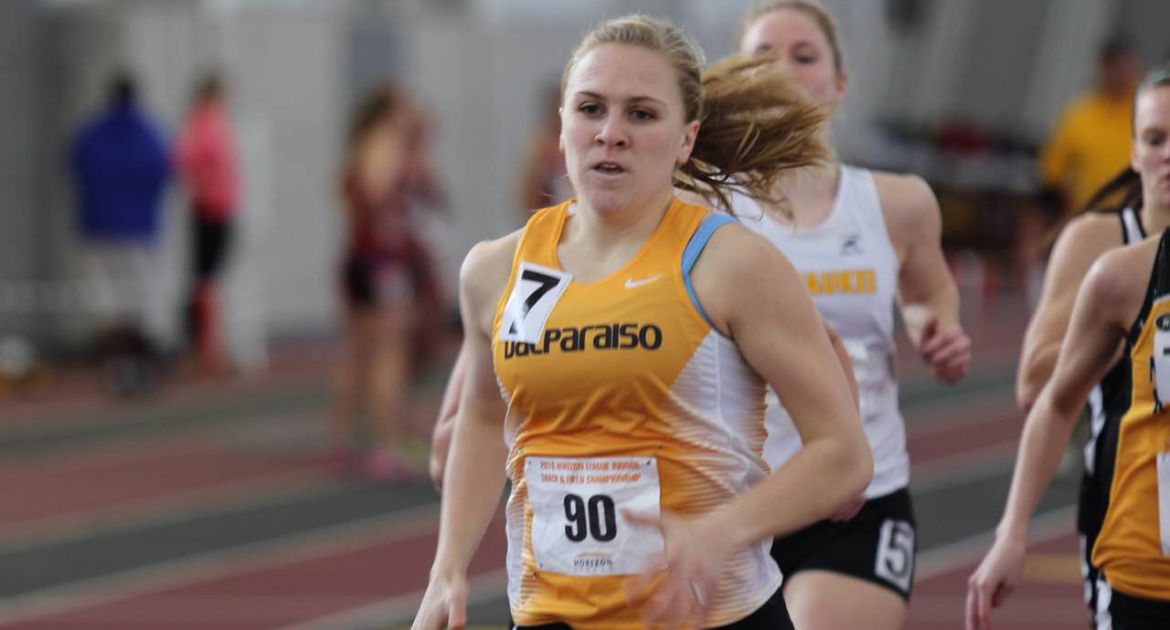 The Valparaiso University men’s and women’s track and field teams finished out the 2016 Horizon League Indoor Championships on Sunday at Youngstown State University, a day which was highlighted by junior Liz Bloy earning Outstanding Running Performer of the Championships.

The Crusader men finished the two-day competition in fourth place overall out of the seven competing teams, scoring a total of 68 points. Host school Youngstown State took home first. On the women’s side, Valpo finished in eighth place with 25 points, while Oakland was crowned champs.

Bloy enjoyed a standout day on Sunday, winning one event and earning a runner-up finish in another. The junior took top honors in the one mile run, breaking the tape in 5:01.89, and also came home second in the finals of the 800m run with a time of 2:17.42. Bloy becomes the first Crusaders to earn the Outstanding Running Performer honor at a league championship meet since Laura Rolf did so indoors in 2009.

Sophomore Kim Heiny hit a PR to lead the Crusaders Sunday afternoon in the 3,000m run, finishing in 10:42.48, while Valpo’s 4x400m relay team of Asia Banks, Cleo Holt, Allison Baylor and Lindsey Arndt picked up a point, finishing in 8th place with a time of 4:12.49. On the infield, Abby Jankowski finished in 11th place in the shot put to lead Valpo with a toss of 40’6 ¾”, while Chidimma Ozodi leapt 33’3” in the triple jump.

On the men’s side, the Crusaders claimed 11 points from a combined four individuals in the heptathlon. Senior Elijah Owen led the way for the Crusaders, finishing fourth in the event as he scored 4,191 points, including second-best showings among the heptathlon field in the pole vault and shot put. Alex Ruscitti and Cameron Beisel placed sixth and seventh with 3,900 and 3,834 points, respectively, fourth and fifth-best in Valpo history, while Connor Hickey finished eighth and was the event’s top performer in the 1,000m run.

The Crusader 4x400m relay team of Joshua Yonker, Nathan Dotts, James Sampson and Anthony Franze produced the team’s best time of the year in the event, finishing in 3:25.67 to pick up a fifth-place finish and bring in four points. Jeru Lollis placed seventh in the finals of the 60m dash with a time of 6.99 seconds to earn two points, while Adam Bruno matched his finish in the one mile run, crossing the line in 4:15.54 – fifth-fastest in program history. Ben Zibricky finished just behind Bruno in the mile, placing ninth with a time of 4:17.76, and Max Morello led the Crusader pack in the 3,000m run, covering the distance in 9:10.06.

Montell Hall and Malik Riley each placed in the top-eight in the triple jump, both scoring points for the Crusaders as they posted PR distances. Hall jumped 43’4 ½” to place fifth overall, while Riley jumped 42’9 ¾” to finish in eighth place. Jonathon Heagy placed sixth in the high jump with a height of 6’4 ¼”, matching his PR and bringing in three points. Andrew Guzek posted a mark of 47’7” in the shot put as well.

The Valparaiso men’s and women’s teams will head into a three-week break before kicking off the start of their outdoor season at the Billiken Kickoff, hosted by Saint Louis.