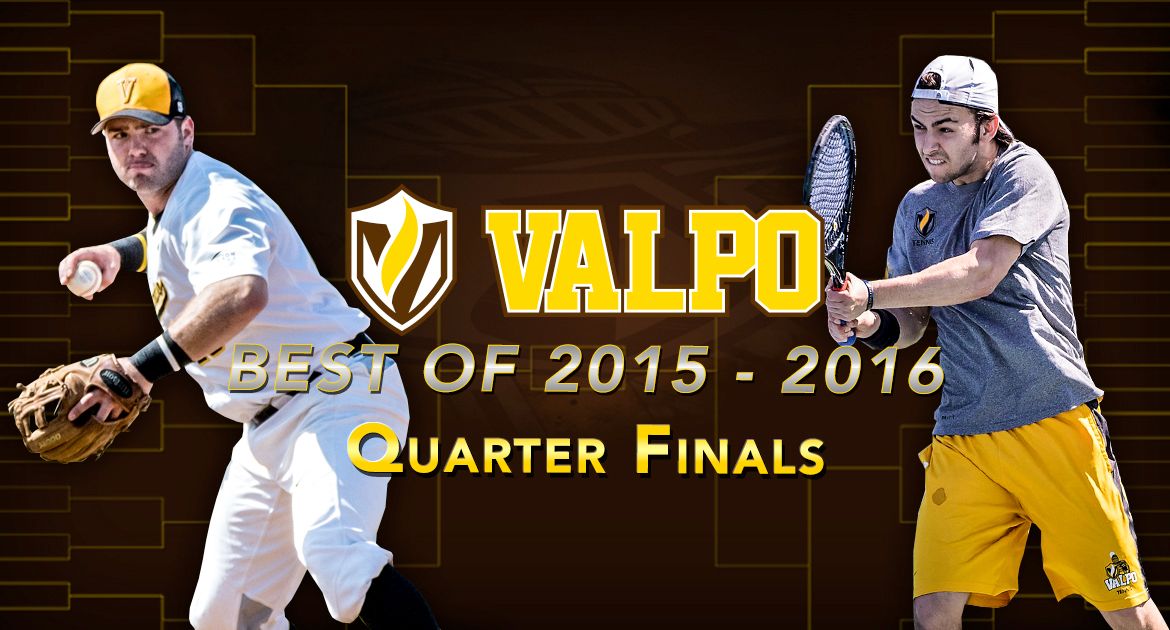 - Having been left out of the NCAA Tournament field, there would be no malaise from the Valpo men’s basketball team as it took to the court for the NIT. It started innocuously enough with a win over Texas Southern. Then came a rare visit from a power-conference school to the ARC – a wire-to-wire win over Florida State. The quarterfinals saw the Crusaders provide a defensive show for a record-setting crowd at the ARC, as Valpo limited Saint Mary’s to just 13 second-half points in a 60-44 win to punch its ticket to New York City. Playing at historic Madison Square Garden, the Crusaders rebounded after surrendering a 16-point lead in the second half, getting the go-ahead 3-pointer with 17 seconds remaining from David Skara in a 72-70 victory over BYU. The run came up one win shy of the NIT title, but along the way, the team won four postseason games for the first time in program history and capped a season where it won a program-record 30 games.

- Competing in his first league outdoor championship meet, freshman Connor Hickey was putting together a solid performance in the decathlon through eight events, but still found himself over 350 points back in third place. Hickey topped the field in the javelin in event number nine, but still remained in third position and 262 points behind entering the final event. But Hickey kicked it into high gear in the finale – the 1,500m run. The freshman crossed the line in 4:27.23, besting the entire field by over 34 seconds and erasing the entire deficit to claim the league title in the prestigious multi-event. Hickey would go on to be named the league’s Freshman Field Athlete of the Championship.

- In eighth place with eight days to go in the regular season, needing a win on the final day of the regular season just to secure a spot in the tournament. But once it got to the Horizon League Championship, the Crusader softball team more than proved it belonged. The sixth-seeded Crusaders rolled through the first three days of the tournament, out-scoring Youngstown State 10-6 before Taylor Weissenhofer tossed back-to-back shutouts versus Wright State and UIC to advance to Championship Saturday. It looked like the tournament was destined for a winner-take-all game, as Valpo trailed 4-0 entering the bottom of the seventh inning to Wright State in the first title game. But the improbable run was missing just an improbable rally, as the Crusaders pushed across four runs to force extra innings and earned the walk-off tournament championship in the bottom of the eighth. Sam Stewart was named Tournament MVP, while Weissenhofer – who pitched all but two outs over the four games – was named Pitcher of the Championship and Lanie Callaghan was named Batting Champion.

Baseball's win over Milwaukee in the Horizon League semifinals - May 27, 2016

- It was looking dire for the Crusaders with a berth to Championship Saturday at the league tournament on the line in an elimination game, as Valpo trailed Milwaukee 6-0 through two innings and were already into a taxed bullpen. But the Crusaders chipped away, scoring four runs over the next three innings, and then after an unearned tally crossed for the Panthers in the sixth, Valpo received a two-run double from Nolan Lodden and an RBI groundout by Josh Clark in the top of the seventh to tie the game at 7-7. Scott Kapers delivered a one-out solo homer in the top of the eighth to put the Crusaders in front and cap the comeback, and Valpo would pour on four more runs to advance to the title game. A trio of Crusader relievers combined for eight innings of one-run ball, striking out eight.

- The feeling it might be a special day on the court for Alec Peters took hold early on at Detroit, as he scored 10 points inside of the first five minutes. And it would turn out to be a career day for the junior. Peters scored 25 first-half points and then scored 14 more in the game’s final nine minutes, setting a new career high with 39 points on 12-of-20 shooting in the Crusader victory. The 39 points is tied for seventh-most in a single game in Valpo history, while Peters also went 11-of-11 from the foul line – the best performance by a Crusader at the stripe in 18 years. Not to be overlooked was his work on the glass, as Peters grabbed a then-career best 14 rebounds.

- The Valparaiso men’s soccer program entered the 2015 campaign having never defeated multiple ranked teams in the same season. That would change in late September, as the 2015 side needed just six days to accomplish the feat. The Crusaders went to #18 Western Michigan on Sept. 23 and earned a 2-0 win behind goals from Isaiah Madrid and Jordan Aidoud. Then, just five days later, Valpo hosted #23 Omaha and, after a scoreless 90 regulation minutes, got the golden goal in the 99th minute from Andrew Avram. Nico Campbell and the defense posted clean sheets in both wins – part of a stretch of five straight shutouts by the Crusaders – while the wins were the fifth and seventh games in a program-record eight-game unbeaten streak.

- The Crusader men’s tennis team felt it had unfinished business after losing last year’s Horizon League title match to Green Bay, and after winning the 2016 regular season title and easily dispatching Cleveland State in the league tournament semifinals, faced off once again with the Phoenix with the league championship on the line. Wins at first and second doubles gave Valpo the 1-0 lead, and Jeffrey Schorsch and Charlie Emhardt earned straight-set wins to move the Crusaders to the brink of the title. It would be Garrett Gardner who rallied for a three-set win at fifth singles to clinch the title – Valpo’s first tournament title since joining the Horizon League and assuring the team it’s first-ever berth in the NCAA Tournament.

- It was a day to remember for junior Liz Bloy at the league's indoor championship meet. After qualifying for the event final in the 800m run the day before, Bloy kicked off the second day of action by winning the one mile run by four-tenths of a second - the first league championship of her career. The junior followed that up with a second-place finish in the 800m finals. At meet's end, Bloy was named the Outstanding Running Performer of the Championships - the first Crusader since 2009 to earn the accolade.