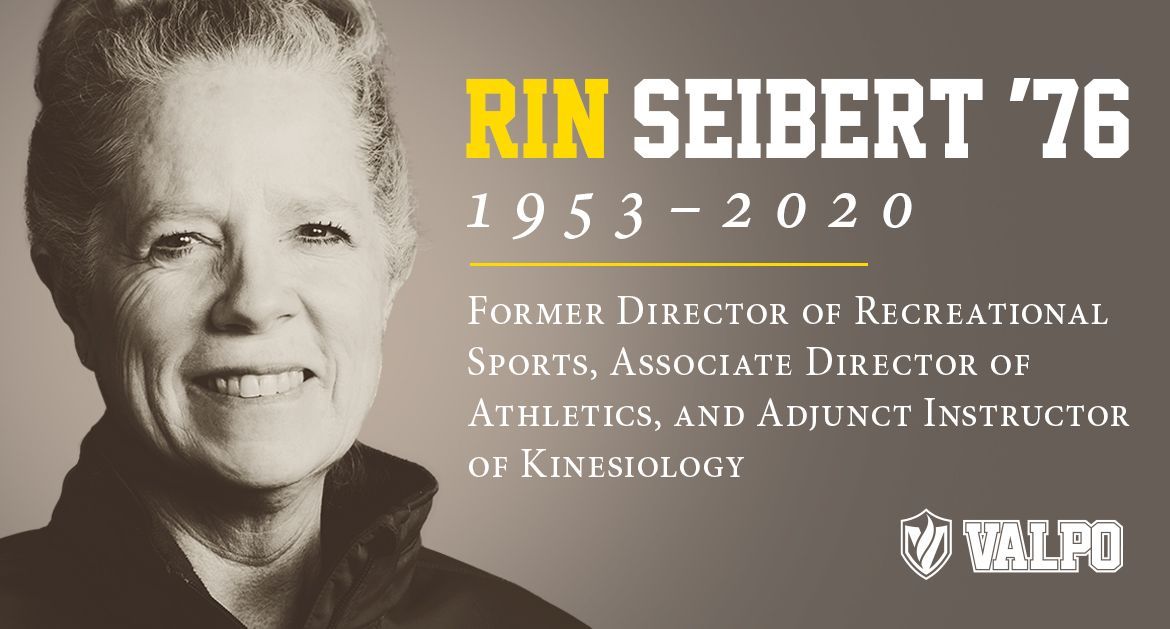 The Valparaiso University Athletics family is deeply saddened by the loss of Rin Seibert ’76, who passed away on Friday, Aug. 21 after a two-year battle with cancer.

“Rin exemplified the Valpo Experience,” Director of Athletics Mark LaBarbera said. “Her heart for students, their personal and spiritual growth and their enjoyment of life through athletic activity was unmatched. She was an amazing colleague and a true servant leader and is already greatly missed.”

Rin won numerous awards and honors, a product of her dedication to her craft and passion for her position. She received the NIRSA Regional Award of Merit for Outstanding Contributions to Region III in 2016, the Panhellenic Council Excellence in Teaching Award in 2015 and the Valparaiso University Outstanding Service Award for 30 years of service in 2010. She also served as a member of Valpo’s faculty, instructing undergraduate courses in the Department of Kinesiology.

After graduating from Valpo in 1976 with a degree in physical education, Rin spent two years as an assistant director at the Valparaiso Family YMCA, where she helped build the competitive gymnastics program. She followed that up by taking on a graduate assistantship in recreational sports at Indiana University in Bloomington, where she earned her master’s in recreation in 1979. She spent one year working in recreational sports at Marquette before she returned to her undergraduate alma mater to lead rec sports at Valpo.

“Rin fell into my lap in 1980 when I was combining men’s and women’s intramural and campus recreation,” said Dr. Bill Steinbrecher, who served as Valpo Director of Athletics from 1979-2004. “Then, our family lives became intertwined through a marriage, donations of blood and platelets for her second son Andy, baptisms and sponsorships. In my mind, this wonderful individual skillfully and lovingly touched the lives of more Valpo students than any other person. I will grieve for her forever.”

Rin and her husband John, the executive director for Parks & Recreation for the City of Valparaiso, have been actively involved in the Northwest Indiana community for many years. She also served as a judge for high school gymnastics meets for the IHSAA for nearly four decades and judged numerous sectional, regional and state championship meets. She earned the 2017 Interscholastic Athletic Official Award for excellence in the sport of gymnastics.

Rin’s Valpo legacy will live on through the Rin Seibert Scholarship, an initiative spearheaded by the Valparaiso volleyball program and head coach Carin Avery during the 2019 season. The program set out to recognize Rin’s courage and faith through her battles with cancer and to thank her for her longtime support of Valpo volleyball, Valpo Athletics and the Department of Kinesiology by raising funds for a scholarship in her name. The goal has been extended to $50,000 to endow a permanent scholarship in Seibert’s name, and the crowdfunding effort is still active. Fans can donate by visiting the Crowdfunding at Valpo web page.

A Visitation will be held on Saturday, Sept. 12 from 11 a.m. to 3 p.m. at Calvary Church (1325 Evans Ave.) in Valparaiso. A Celebration of Life Service will be held on Sunday, Sept. 13 at 3 p.m., also at Calvary Church. In lieu of flowers, memorial donations may be made to The Seibert Family Foundation. More information can be found here. Masks and appropriate social distancing will be required during both the visitation and the service and both are open to the public. For those who wish to honor Rin but do not feel comfortable doing so in person, information about the live streaming of the service can be found here.