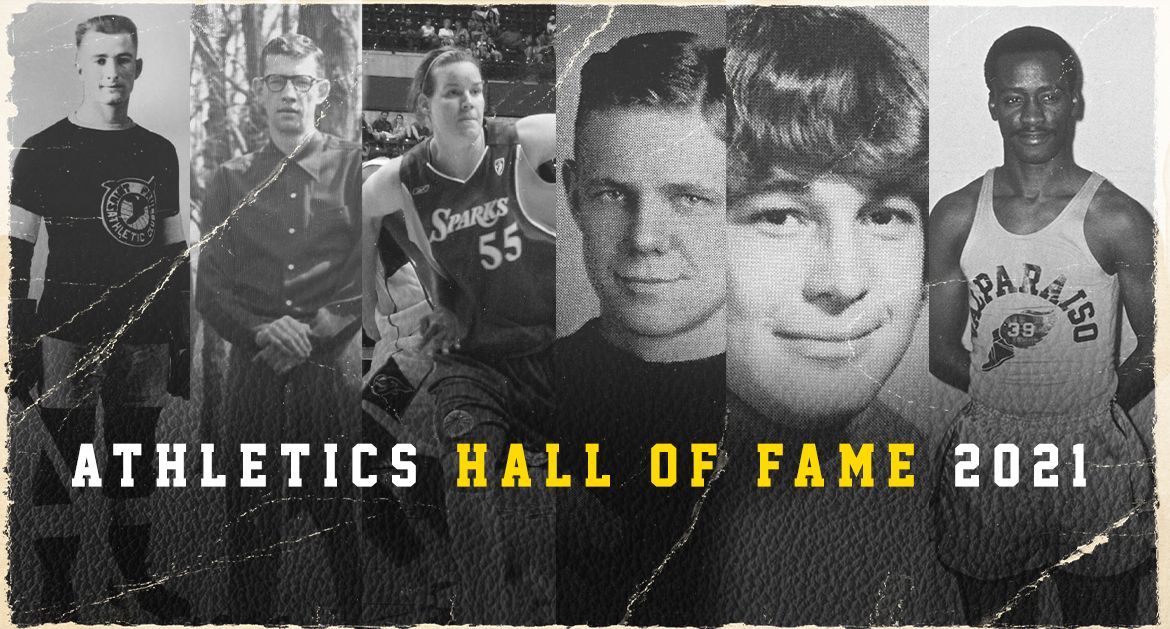 Six individuals have been inducted into the Valpo Athletics Hall of Fame as the Class of 2021. Frank “Moose” Goheen, Kenneth Olson ’33, Al Holmes ’55, Mike Urio ’65, Curt Peil ’73 and Marlous Nieuwveen ’02 comprise the 24th class in Hall of Fame history.

One of the top American ice hockey players of his time, Goheen played football and baseball during his time on campus in the late 1910s into early 1920. He left school in the spring of 1920 to captain the United States ice hockey team at the 1920 Summer Olympics, leading the squad to a silver medal. A distinguished playing career ensued, resulting in Goheen becoming just the second American inducted into the Hockey Hall of Fame in 1952.

Olson was the signal caller for some of the most successful Valpo football teams in program history in addition to playing basketball and baseball. His career came to a triumphant close with the 1932 campaign as he quarterbacked the Brown and Gold to a perfect 7-0 record, one of just two undefeated seasons in program history. A three-year starter at quarterback, Olson amassed 20 wins over his final 21 games under center.

Holmes was a standout on the golf links for Valpo in the 1950s. He claimed three Indiana Collegiate Conference individual championships and led Valpo to a pair of ICC team titles during his time in the Brown and Gold. Holmes also was a two-time individual medalist at the Indiana Little State Championship and helped lead the Valpo squad to a team Little State title as well.

A key member of some of the best cross country teams in program history, Urio was one of the first Black student-athletes to compete for Valparaiso University. He posted top-50 individual finishes at the NCAA Championships in each of his final two seasons, helping Valpo to a fourth-place team finish as a junior and seventh place as a senior. A two-time team MVP, Urio twice led Valpo at the ICC Championships and helped the team earn its first ICC team title as a junior. Also a member of the track & field squad, he finished second as a senior at the ICC Championships in the two-mile run.

Peil was a dominant force on the wrestling mat for the Brown and Gold in the early 1970s. He was a three-time Indiana Collegiate Conference champion in the heavyweight division, collecting conference titles in 1970, 1971 and 1973. Peil’s victory as a freshman in 1970 helped Valpo earn its second consecutive team championship. He made his mark on the national scene as a sophomore in 1971, qualifying for the NCAA meet and winning his first-round match in that tournament. A three-sport athlete at Valpo, Peil also started on the defensive line for the football team and competed in the throws for track & field.

Nieuwveen was a standout post player for the Brown and Gold in the late 1990s and the early 2000s and became the first Valpo alumna to play in the WNBA. She currently ranks ninth in program history in both career scoring and rebounding. As a senior in 2001-02, Nieuwveen was a First Team All-Mid-Continent Conference selection and helped lead the way as Valpo won the Mid-Con regular season title and advanced to the quarterfinals of the WNIT. Following her graduation from Valparaiso University in 2002, Nieuwveen played professionally for over a decade — including a stint with the Los Angeles Sparks of the WNBA in 2005. She is currently the head coach for Loon Lions Landsmeer in the Netherlands.