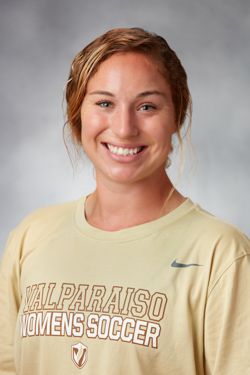 Erin Scott joined the Valparaiso University women's soccer program as a graduate assistant coach in the summer of 2019.

Scott comes to Valpo following a four-year career as a Division I goalkeeper. She spent her final two years at Campbell, where she started all 38 games. A two-time Big South Defensive Player of the Week, Scott posted a 1.02 GAA as a junior in 2017, fourth-best in a single season in program history. She ranks second in Campbell career history in shutouts (9), fifth in GAA (1.23) and seventh in saves (157).

Prior to her time at Campbell, Scott played two seasons at Creighton. She made 24 starts over her two years with the Bluejays, including 20 starts as a freshman in 2015. Scott stopped 108 shots as a rookie for Creighton, second-most in a single season in program history.

Scott spent the 2019 spring semester as a student assistant for the Campbell women’s soccer program. She has served as a coach at Camp Shutout, a camp devoted to training high-level youth goalkeepers, for the past four years and also assisted with Campbell soccer camps during her time with the Camels.

Scott graduated from Campbell University with bachelor's degrees in broadcast/electronic media and sports communication. She is currently pursuing her master's degree in sports media at Valpo.