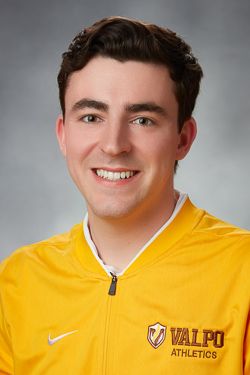 Robbie Crimmins joined Valpo Athletics in November 2018 as the Director of Event Operations. In his role, Crimmins is responsible for helping oversee the department’s event management and facility operations.

A native of Tower Lakes, Ill., Crimmins graduated from Valpo in May 2018 with a bachelor’s degree in sports management with minors in business administration and communications.

Crimmins has worked in Major League Baseball as a member of the game and event setup crew for the Chicago Cubs. He has also worked at Hawthorn Woods Country Club as an assistant to the golf professionals.

During his four undergraduate years, Crimmins served as a men’s basketball manager. He was the head manager for head coach Matt Lottich’s staff during the 2017-18 season. In his role as a manager, Crimmins handled management of basketball equipment for practices and games, oversaw video operations, provided assistance to coaches and players, helped organize team travel and coordinated with other schools on their visits for games hosted by Valpo.

From 2016-2018, Crimmins served as a member of Valpo’s facility and operations crew, working alongside the facilities manager for all Valpo athletic facilities. In addition, he was a building supervisor and intramural official during that time. His long list of involvements during college also includes Kinesiology Club, Intramural Advisory Council, Phi Delta Theta Fraternity, Valparaiso Park District Assistant Youth Sports Coordinator and Lake Barrington Shores Golf Course.