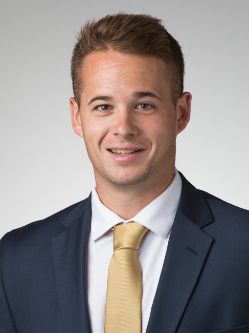 Jake Sale joined Valpo’s staff in June 2019 as the Assistant Director of Valpo's annual giving fund for athletics. He was promoted to Assistant Athletic Director for Development in August 2021.

Sale came to Valpo after previously serving as a ticket sales and development graduate assistant for Illinois State University Athletics for the 2017-18 and 2018-19 academic and athletic years. During his time in Normal, Sale achieved significant fundraising and ticket sales goals. He was credited with generating the most revenue on the Sales and Development team in 2018-19.

Sale helped raise a significant amount for an athletic training project during Redbird Philanthropy Week at Illinois State. In addition, he was directly responsible for planning the department’s Taste of Redbirds fundraising event and was credited for the creation, design, marketing, implementation and execution of men’s and women’s basketball group experiences.

Before joining Illinois State’s staff, Sale served as an account executive and a Director of Community Relations for the Bloomington Thunder hockey team from August 2016 to April 2017. He managed eight to 10 corporate sponsorship accounts throughout the season while also reaching significant ticket sales goals. He was also directly responsible for increasing the team’s involvement with the youth hockey market and in charge of scheduling and directing all community service events.