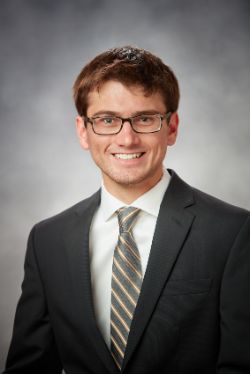 Brandon Vickrey serves as an Assistant Director of Athletics for Media Relations at Valparaiso University, a role he has occupied since September 2016.

Vickrey is the primary media relations contact for men’s basketball, football, baseball, men's and women's golf and women's tennis. He spent three seasons as the women’s basketball contact before taking over men’s basketball responsibilities for the 2019-2020 season. He also spent four years as the contact for the men's soccer and men's tennis programs program from 2016-2020. During his time working in athletics media relations, Vickrey has helped increase the department’s visibility and media coverage.

In addition to handling sports information and media relations responsibilities for his assigned programs, Vickrey serves as the host of many of the department’s video interview segments. He currently hosts Valpo Basketball Weekly with men’s basketball coach Matt Lottich and Valpo Football Weekly with football coach Landon Fox. In addition, Vickrey handles color commentary on road radio broadcasts for football and men’s basketball alongside longtime play-by-play broadcaster Todd Ickow and previously contributed to road radio broadcasts for the women’s basketball program. His voice can also be heard at Valpo baseball games, where he serves as the public address announcer.

During his time at Valpo, Vickrey helped the department promote its transition from the Horizon League to the Missouri Valley Conference. He also served as the media relations contact for the football team’s first winning season in 15 years, promoting the accomplishments of student-athletes and Pioneer Football League Coach of the Year Dave Cecchini. Vickrey has also promoted the accomplishments of a successful Valpo men’s tennis program, including the program’s 2017 Horizon League Championship and NCAA Tournament appearance.

A member of CoSIDA, Vickrey has provided oversight of numerous graduate assistants and student workers during his time at Valpo. In addition to his primary sport responsibilities, he oversees the GA who handles communications for men’s and women’s cross country and track and field. Vickrey served as the media relations contact for the 2019 MVC Women’s Golf Championship, the first Missouri Valley Conference Championship event hosted by Valparaiso University

During his undergraduate days, Vickrey served stints as sports editor of The Torch, Valpo's student newspaper, and as sports director at WVUR, Valpo's student campus radio station. He also contributed to numerous broadcasts on WVUR and ESPN3 in play-by-play, color commentary and studio roles for Valpo soccer, football, volleyball, basketball, baseball and softball. He was the play-by-play voice of the 2014 Horizon League Women’s Soccer Championship on ESPN3.

Outside of Valparaiso University, Vickrey has spent seven seasons with the Northwest Indiana Oilmen baseball team of the Midwest Collegiate League, including five as the team’s Director of Communications. With the Oilmen, he is the lead play-by-play broadcaster and oversees communications for both the Oilmen and the league as a whole. He also spent three years writing for the Post-Tribune newspaper as a freelancer writer, serving as the paper's beat reporter for Valparaiso University football while also handling the prep tennis and swimming beats. A fixture on the Northwest Indiana sports scene since his freshman year of high school, Vickrey gained experience with Ideas in Motion Media, the parent company for the websites ValpoLife.com, PortageLife.com, LaPorteCountyLife.com and NWIndianaLife.com. After starting as a coverage team member, he was elevated to an office role with Ideas in Motion Media, overseeing a staff of part-time coverage team members.

Vickrey has worked for 89.1 FM The Lakeshore in Merrillville, Ind., serving as a board operator and update anchor during the station’s Gary SouthShore RailCats, Indiana University basketball/football and Purdue University basketball/football broadcasts. He was also a correspondent for the station’s prep football show, Lakeshore Gamenight, and occasionally served as a fill-in host. He has also made frequent appearances as a guest on AM 1230 WJOB Hammond, including the program’s popular morning show hosted by Jim Dedelow.

Vickrey has also worked on numerous TV productions as a talent statistician and official statistician. He has filled those roles for games airing on ESPN, CBS Sports Network and the MVC TV Network. He has also input basketball stats for other local colleges, including NCAA Division-II Purdue Northwest in Hammond and Westville.

A native of Portage, Ind., Vickrey earned a bachelor's degree in digital media from Valparaiso University in 2016 and completed his master's in sports administration from Valpo in 2020.