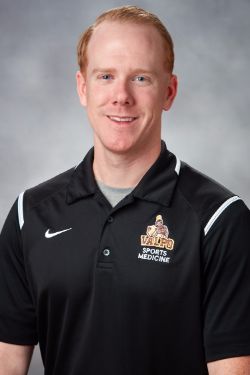 Creighton came to Valpo after a three-year stint as the head athletic trainer for the Fort Wayne Komets professional hockey team. He coordinated every aspect of day-to-day sports medicine care for professional athletes in addition to maintaining athletic training equipment and administering daily treatment, rehabilitation and management of injury/illness.

Creighton served as a graduate assistant athletic trainer at Michigan State University from August 2011 to July 2013, working with football and men’s and women’s swimming and diving.

Creighton graduated from Michigan State in 2013 with a master’s in education with a concentration in athletic training. He earned the Ken and Kirsten Zisholz Outstanding Athletic Training Graduate Student Award. He graduated from Purdue in 2011 with a bachelor’s in athletic training and was honored as the Most Outstanding Athletic Training Student in 2010-11.