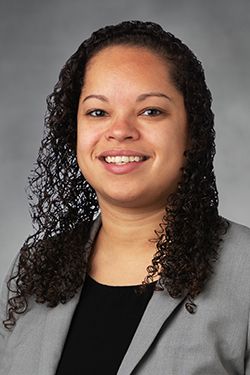 Gabby Johnson joined the Valpo women's basketball program as an assistant coach prior to the 2018-19 season and completed her second season on the bench in 2019-20.

In her second year on staff, Johnson helped guide one of the nation's most impressive year-over-year turnarounds. The 2019-20 Valpo squad jumped 171 spots in the RPI to 133 - the largest leap by any Division I program in the nation.

Johnson joined Valpo’s staff after a tenure as the head coach at Dominican University in River Forest, Ill. that began in 2012. A graduate of Thomas More College in Crestview Hills, Ky., Johnson was an assistant coach at Northern Kentucky University from 2010-2012. The Norse posted consecutive winning seasons and reached the Division-II NCAA Tournament in 2012.

Johnson started her coaching career at her alma mater as an assistant during the 2009-2010 season, helping the team to a 26-4 record and Division-III NCAA Tournament berth. As a student-athlete, Johnson won three Presidents Athletic Conference regular season championships, two tournament titles and finished third in program history in career assists. During her time as a team captain, the program compiled a 57-4 record. Overall during her career, she helped Thomas More to a 99-16 mark.