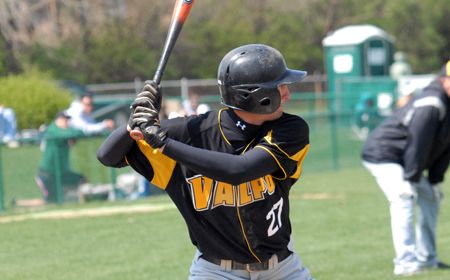 Valparaiso scored twice in the ninth, and left two more runners on base on Tuesday afternoon, but it was a little too late as the Crusaders fell 7-3 to #21 Arkansas at Baum Stadium in Fayetteville, Ark.

Arkansas (6-1) jumped in front early, scoring four times in the opening inning.  Zack Cox had a two-run double in the inning, the second extra base hit for the Razorbacks.

The lead grew to 6-0 in the second as Arkansas capitalized on a Crusader error, and plated a pair of unearned runs.

Three straight hits in the top of the fourth put Valpo on the scoreboard.  Josh Wallace (Bellefountaine, Ohio/Bellefountaine H.S.) and Kyle Muhlsteff (Yorba Linda, Calif./Esperanza H.S.) each had one out hits, and Gaedele followed with a run-scoring single to right.

The Razorbacks added one final unearned run in the bottom of the fourth, and the teams traded zeros on the scoreboard until the ninth.

“We gave up too many runs early,” said Woodson.  “That’s a killer for us.”

Ranko Ivetic (Schererville, Ind./Lake Central H.S.) led off with a pinch hit single.  With one out, Ryan O’Gara (Buffalo Grove, Ill./Buffalo Grove H.S.) walked and Muhlsteff was hit by a pitch.  Gaedele singled up the middle to score Ivetic, and a groundout followed to plate O’Gara, cutting the lead to 7-3.  Geoffrey Davenport got the out to record the save for Arkansas though.

John Snelten (Ingleside, Ill./Antioch H.S.) started and suffered the loss (0-1) for Valpo, working 3.2 innings and allowing all seven runs, only four of which were earned.  He also allowed seven hits and three walks while striking out one.

The Crusader bullpen came in and tossed two-hit ball over the final 4.1 innings of work.

“Snelten didn’t have any offspeed stuff today, and they were hitting the fastball,” concluded Woodson.  “Our bullpen did a great job though.”

Valparaiso (4-2) and Arkansas (6-1) will wrap up the two-game midweek series on Wednesday afternoon with a 3:05 p.m. contest at Baum Stadium.