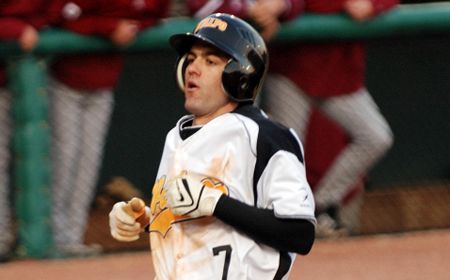 Mississippi State scored seven times in the first two innings of game one, then rallied for five runs in the final two frames of the nightcap on the way to sweeping a doubleheader from Valparaiso 9-2 and 5-4 on Wednesday at Dudy Noble Field in Starkville, Miss.

In the opener, Valpo scored first as Steven Scoby (Delton, Mich./Kellogg H.S.) led off with a walk, advanced to second on a wild pitch, and scored on a single by Josh Wallace (Bellefountaine, Ohio/Bellefountaine H.S.).

The Bulldogs wasted little time responding.  A two-run triple by Ryan Collins keyed a three-run first and Jet Butler added a three-run double in the second as part of a four run inning to put the hosts on top 7-1 after two innings.

A RBI groundout by Ryan O’Gara (Buffalo Grove, Ill./Buffalo Grove H.S.) plated Scoby in the third with Valpo’s final run of the game as Mississippi State would pick up single tallies in the sixth and seventh for insurance.

Ricky Bowen worked five innings allowing two runs and four hits while striking out six for the win (1-0) while Lee Swindle came on and pitched four scoreless innings fanning seven for the save.  Bryce Shafer (Wabash, Ind./Northfield H.S.) suffered the loss (2-1) for Valpo, allowing eight hits and eight runs in 5.1 innings. He struck out six and walked four.

Scoby and O’Gara each had two hits for Valpo in the opener while Butler went 4-for-4 with four runs batted in for Mississippi State.

Game two saw Valpo jump on top in the third inning with four runs.  Billy Cribbs (Rochester, Mich./Rochester H.S.) opened the inning reaching on an error and advanced to second on Damon McCormick’s (Louisville, Ky./Saint Xavier H.S.) bunt single.  Scoby followed with a single to load the bases and Kyle Muhlsteff (Yorba Linda, Calif./Esperanza H.S.) cleared the bases with a double to left-center.  David Klein (Aurora, Ill./Oswego East H.S.) followed with a single up the middle to plate Muhlsteff and the Crusaders led 4-0.

Mississippi State brought in Drew Hollinghead out of the bullpen and he went six scoreless innings to allow the Bulldogs to stay in the game.  The hosts tied the game in the bottom of the eighth, scoring four times, including a two-run double by Connor Powers that knotted the game at four.

In the ninth, Russ Sneed led off with a double and following a sacrifice bunt, scored the winning run on a ground ball.

“This was a game we wish we could have closed out,” head coach Tracy Woodson said.  “We’re playing against better competition, but that doesn’t mean we can’t finish games.  It’s disappointing we didn’t win the game.”

Valparaiso (4-8) will finish its spring trip with a four-game weekend series in Cookeville, Tenn. beginning on Friday afternoon with a twinbill against Tennessee Tech.  First pitch is set for 2 p.m. CDT with all the action carried live on www.sportsjuice.com.