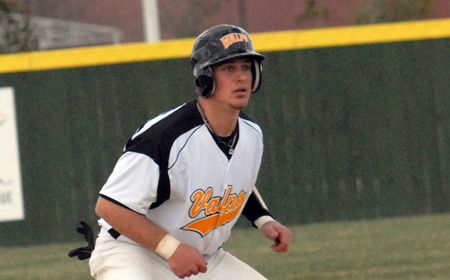 Valparaiso jumped out to a 4-1 lead and Matt Lenski (Milwaukee, Wis./Marquette University H.S.) went 4-for-4 on the afternoon for the Crusaders, but Indiana battled back to defeat Valpo 9-5 on Wednesday afternoon at Sembower Field in Bloomington, Ind.

“We had too many opportunities, especially early, and didn’t take advantage of them,” head coach Tracy Woodson said. “We let chances get away.  We swung the bats well and hit the ball well early.”

Lenski had four singles and a walk, and drove in the first run for the Crusaders while raising his team-leading average to .418 on the season.  In the opening inning, the senior catcher singled through the right side to score Dan DeBruin (Combined Locks, Wis./Kimberly H.S.) and put Valpo on top early.

The Hoosiers answered with a run in the bottom of the inning on a single by Josh Phegley, but the Crusaders immediately answered with three more runs in the second.  Ryan Shober (Inverness, Ill./Fremd H.S.) singled up the middle to score Steven Scoby (Delton, Mich./Kellogg H.S.) and two batters later Kyle Muhlsteff (Yorba Linda, Calif./Esperanza H.S.) doubled to the gap in right-center to plate both DeBruin and Shober.

Again Indiana answered, this time taking advantage of a Valpo error.  A Vince Gonzalez single scored two unearned runs, cutting the lead to 4-3.  The Hoosiers took the lead with three runs in the third.  An Alex Dickerson double, one of three hits on the afternoon for him, scored the first run and he eventually scored on a wild pitch.  Evan Crawford also added a run-scoring single in the inning as the hosts went on top for good.

A Dickerson single in the fourth increased Indiana’s lead to 7-4 before Valpo mounted its next threat in the seventh.  Muhlsteff led off with a single and Lenski followed with a base hit of his own.  Josh Wallace (Bellefountaine, Ohio/Bellefountaine H.S.) doubled to left to score Muhlsteff, leaving runners on second and third with no one out.  The Crusaders were not able to push another run across the plate though, and headed into the stretch trailing 7-5.

Indiana added two more insurance runs in the seventh, including a homerun by Dickerson, to cap the scoring.

Muhlsteff also had three hits for the Crusaders on the afternoon as Valpo banged out 12 hits on the day.  Tyler Rogers also had a three-hit day for the Hoosiers, as Indiana recorded 15 for the game.

John Snelten (Ingleside, Ill./Antioch H.S.) started for Valpo and suffered the loss (0-3), allowing seven runs, four of which were earned, and nine hits in five innings of work.  Matt Carr earned the victory (1-3) in relief for Indiana  Chris Squires pitched the final 2.2 innings for his first save of the year. (13-17) pitching three innings and allowing just one run.

Valparaiso (10-15) will open a five-game homestand on Friday afternoon at Emory G. Bauer Field with a doubleheader against North Dakota.  First pitch is slated for 12 p.m.

Game Notes: Muhlsteff extended his hitting streak to nine straight games … Lenski’s four-hit game was the first of his career at Valpo … Muhlsteff had his third three-hit game of the season.