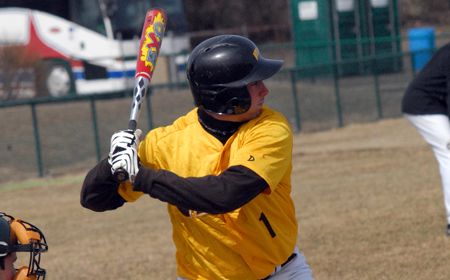 For the second straight day Valparaiso posted a doubleheader sweep of North Dakota to wrap up the four-game weekend series, defeating the Fighting Sioux 6-5 in 10 innings and 5-0 at Emory G. Bauer Field on Saturday afternoon.

“Our pitching this weekend was really good,” head coach Tracy Woodson said.  “We got timely hits when we needed them as well.”

The opener saw Valpo squander a 5-0 lead only to score the winning run with one out in the 10th inning.

Valpo added to the lead in the fifth on a single by Andrew Quinnette (Kokomo, Ind./Kokomo H.S.) to again plate Lenski, and the Crusaders led 5-0.

Two sixth inning errors allowed the Fighting Sioux to tie the game with five runs in the inning.  Nicholas Breener had a two-run double, and Josh Lagein’s single scored Brenner with the tying run.

The game stayed knotted at five until the 10th when Lenski led off with a single against starter Mike Lueck, who was still in the game.  After a pitching change and an out, Ryan O’Gara (Buffalo Grove, Ill./Buffalo Grove H.S.) singled up the middle on a hit-and-run to put runners on the corners.  David Klein (Aurora, Ill./Oswego East H.S.), pinch-hitting, then delivered the game-winning hit into left-center.

“It is big when we can have guys come off of the bench and deliver big hits, especially in extra innings,” added Woodson.

Lueck suffered the loss (0-5), despite tossing nine innings and allowing all six runs, five of which were earned, and striking out five.

Lenski finished the game 3-for-5 while Quinnette also had two hits as part of Valpo’s 12-hit attack.  North Dakota had 11 hits in the game, but failed to completely take advantage of five Crusader errors in the game.

In the nightcap, Valparaiso scored five times in the fifth inning for all of the scoring, four of the runs being unearned as the Crusaders took advantage of two North Dakota (6-19) errors.  Back-to-back singles by Billy Cribbs (Rochester, Mich./Rochester H.S.) and Gaedele with one out started the rally and DeBruin reached on a bunt single on a squeeze attempt that plated Cribbs.  A double steal attempt in which the catcher threw the ball into left field scored Gaedele and moved DeBruin to third, and he scored on a fielding error by the third baseman.  An infield single by O’Gara loaded the bases, while a hit batsman and walk forced home the final two runs in the inning.

Meanwhile, Bryce Shafer (Wabash, Ind./Northfield H.S.) went the distance on the mound in the seven inning contest for the complete game shutout victory (4-2), the first of his collegiate career.  He scattered just three hits, including just one over the first five innings, while striking out six and walking three.

DeBruin had a three-hit game offensively while O’Gara also had two base hits for the Brown and Gold.

David Lind suffered the loss (0-3) for the Fighting Sioux, allowing five runs, only one of which was earned, and six hits in 4.2 innings of work.

Valparaiso (14-15) will look to move back to the .500 mark on Monday afternoon as the Crusaders complete their homestand hosting Grace.  First pitch is set for 3 p.m. at Emory G. Bauer Field, with all the action carried live on WVUR (95.1-FM, Valparaiso) and online at www.valpoathletics.com.