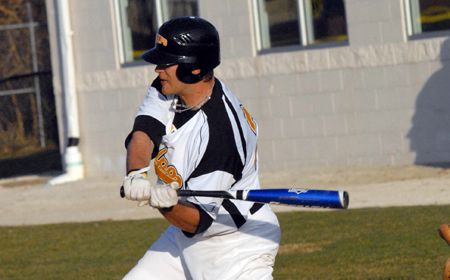 Valparaiso’s bats came alive early on a cold, rainy Monday afternoon as the Crusaders scored nine times in the first three innings and went on to defeat Grace 12-0 at Emory G. Bauer Field.

With the victory, the Crusaders move back to .500 with their fifth straight win to make it a perfect 5-0 homestand.

“We swung the bats fine today and took advantage of their mistakes,” head coach Tracy Woodson said.  “Our pitchers threw strikes with is a big key for us.”

The Crusaders scored four more runs in the second, two on a double by Dan DeBruin (Combined Locks, Ky./Kimberly H.S.) and another on a single by Lenski.  O’Gara singled home the fourth run of the inning as the Crusaders batted around.

Lenski’s two-run single in the third made it 9-0 Crusaders.  Ranko Ivetic (Schererville, Ind./Lake Central H.S.) added a single in the sixth which ultimately scored Josh Wallace (Bellefountaine, Ohio/Bellefountaine H.S.) on a fielding error by the left fielder.  Andrew Quinnette (Kokomo, Ind./Kokomo H.S.) added a run-scoring double and a double play ground out completed the scoring.

“It was good we scored early to give us the chance to play nearly everyone,” added Woodson.

Ivetic also went 2-for-2 on the day as Valpo banged out 13 hits on the afternoon.

Valparaiso (15-15) will look for its sixth straight victory on Tuesday as the Crusaders head to Fort Wayne to face IPFW.  First pitch is set for 2 p.m. CDT.