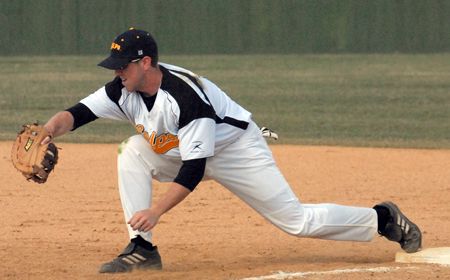 Valparaiso wrapped up its 10-game homestand on Sunday afternoon with a 6-5 victory over Saint Francis (Ind.) at Emory G. Bauer Field.

The Crusaders used a five-run sixth inning to take control of the game, then held off a late Cougars rally to improve to 10-3 at home this season.

Saint Francis (27-16) jumped out to an early 2-0 lead in the third inning.  After a lead-off walk, Travis Potchka tripled in the first run of the game and later scored on a two-out double by Taylor Futterknecht.

Valpo cut its deficit in half in the bottom of the third.  After back-to-back singles by Damon McCormick (Louisville, Ky./Saint Xavier H.S.) and Kyle Gaedele (Arlington Heights, Ill./Rolling Meadows H.S.), the pair moved to second and third on a double steal.  Dan DeBruin (Combined Locks, Wis./Kimberly H.S.) then plated McCormick with a sacrifice fly.

“This game was frustrating,” head coach Tracy Woodson said.  “We didn’t have good at bats for the most part, just giving them away.”

“Deetjen kept the ball down today and threw strikes,” Woodson added.  He needs to do so to be effective.”

The Crusaders got to Peffley in the sixth, batting around and taking advantage of a couple of Cougar errors.  Matt Lenski (Milwaukee, Wis./Marquette University H.S.) doubled to straight away center to tie the game.  After Josh Wallace (Bellefountaine, Ohio/Bellefountaine H.S.) singled Lenski to third, Ryan O’Gara (Buffalo Grove, Ill./Buffalo Grove H.S.), who extended his hitting streak to seven, singled him home.  Kyle Muhlsteff (Yorba Linda, Calif./Esperanza H.S.) and McCormick added RBI singles to increase the lead to 5-0, and Muhlsteff eventually scored on a throwing error to complete the Valpo scoring.

Saint Francis rallied late, scoring a run in the seventh on a hit by Jon Saporsantos and added two more in the eighth as the Crusader relief corps hit two batters and walked two more to plate to plate a pair of runners.

Lenski, Wallace, McCormick, O'Gara and Gaedele all had two hits a piece for the Crusaders as part of a 12-hit attack.  Futterknecht and John Schlichter each went 2-for-5 for Saint Francis.

Valparaiso (18-17) will head to the U.S. Steel Yard in Gary, Ind. on Tuesday evening to battle Purdue in a 7 p.m. contest.  The game will be carried live on WVUR (95.1-FM, Valparaiso) and online at www.valpoathletics.com.