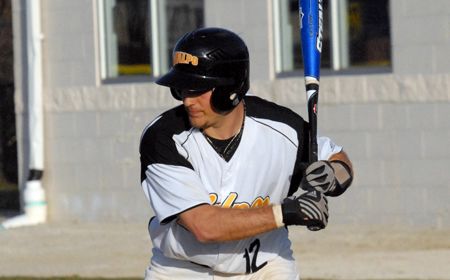 Valparaiso battled through three rain delays, fought back from a five-run deficit, and had the tying runs on base in the ninth on Saturday afternoon, but the Crusaders ended up falling 14-12 to UIC at Les Miller Field in Chicago, Ill.  Game two of the scheduled doubleheader was cancelled due to rain.

“We battled in tough, windy conditions,” said head coach Tracy Woodson.  “We fought until the final out in the ninth and had a chance at the end.”

The Crusaders jumped on top quickly in the top of the first inning.  Dan DeBruin (Combined Locks, Wis./Kimberly H.S.) and Kyle Muhlsteff (Yorba Linda, Calif./Esperanza H.S.) led off with back-to-back singles.  After a flyout, Josh Wallace (Bellefountaine, Ohio/Bellefountaine H.S.) blooped a base hit on the right field foul line to drive in DeBruin.  Ryan O’Gara (Buffalo Grove, Ill./Buffalo Grove H.S.) then beat out a fielder’s choice to stay out of a double play to plate Muhlsteff.

With the wind blowing out more than 20 miles per hour, UIC quickly answered in the bottom of the first inning.  Brandon Harwell led off with a homer to right and Brett Schaeffer added a towering three-run blast halfway up the light pole in right-center as the Flames batted around, scoring six times in the inning.

Kyle Gaedele (Arlington Heights, Ill./Rolling Meadows H.S.) got a run back for Valpo in the second with his second round-tripper of the season over the wall in left to make it 6-3 Flames.

Four more singles by UIC (17-19, 11-4 Horizon) in the second scored two more runs for the Flames before a fly out double play got the Crusaders out of the inning without further damage.

Trailing 8-3 entering the third, Valpo’s offense continued to swing the bats, batting around in the inning to tie the contest.  Matt Lenski (Milwaukee, Wis./Marquette University H.S.) led off with a double and Wallace walked.  After a 14-minute rain delay and a fielder’s choice, a walk to Ranko Ivetic (Schererville, Ind./Lake Central H.S.) loaded the bases.  Damon McCormick (Louisville, Ky./Saint Xavier H.S.) singled to left-center to plate two runs and Gaedele added a run-scoring double down the leftfield line.  With two outs, DeBruin hit a ground ball to second that was misplayed, allowing both McCormick and Gaedele to score unearned runs to knot the game at eight.

UIC retook the lead on a Steve McGuiggan homer to center in the bottom of the third, only to have Lenski retie the game at nine with his blast to right-center in the top of the fourth.

Errors proved costly for the Crusaders in the fourth.  With one out, back-to-back miscues allowed UIC to keep the inning alive, and the Flames took advantage.  They scored three unearned runs, keyed by a two-run double by McGuiggan that one-hopped the rightfield wall.

Valpo got one run back in the fifth as Steven Scoby (Delton, Mich./Kellogg H.S.) singled and stole second.  With two outs, DeBruin looped a single into left to plate Scoby to bring Valpo within 12-10 at the midway point of the game.

Justin Frane (Huntertown, Ind./Carroll H.S.) came out of the bullpen for Valpo with two outs in the fourth, and quieted the UIC bats.  The sophomore right-hander retired the first eight he faced in a row to keep the Flames off of the scoreboard in the fifth and sixth.

UIC added an unearned run in the bottom of the seventh before the rains came yet again with the Flames on top 13-10 and two on and two out.  This time the delay lasted one hour and 56 minutes before Jason Ganek laced a single up the middle on the first pitch following the resumption of play.

With two outs in the bottom of the eighth, the game was delayed by rain for yet a third time.  The Crusaders tried to rally in the ninth.  Two hit batsmen and a single by Gaedele loaded the bases and DeBruin plated a run with a single.  A sacrifice fly by Muhlsteff plated Scoby and cut the deficit to two, but a flyout ended the game.

DeBruin, Lenski, and Gaedele each had three hits for the Crusaders as part of their 15-hit attack.  Harwell, Nathan Orf, and McGuiggan each had three of UIC’s 17 hits.

“Gulbransen didn’t have his best stuff and with the wind blowing out today it was difficult to pitch,” added Woodson.