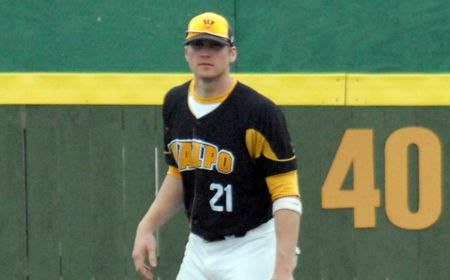 Valparaiso took the nightcap of Saturday’s doubleheader in Youngstown, Ohio, defeating Youngstown State  The Penguins defeated Valpo 8-4 in the opener. 6-5 in the final regular season road game for the Crusaders in 2009.

“We came out here to get a split and we got that done,” head coach Tracy Woodson said.  “We are excited about that.  Now we have to get ready to come back home and play again tomorrow.”

Valpo jumped on top early in game two, taking advantage of four Penguin errors in the game, the first scoring Dan DeBruin (Combined Locks, Wis./Kimberly H.S.) in the opening inning.  An Anthony Porter RBI single in the bottom of the inning tied the game at one though.

David Leon cut the YSU deficit in half in the bottom of the inning with a single, but the Crusaders added to their lead in the fourth as Damon McCormick (Louisville, Ky./Saint Xavier H.S.) scored O’Gara with a single.  Matt Lenski (Milwaukee, Wis./Marquette University H.S.) added a run-scoring double in the fifth and a bases loaded walk to Scoby in the same inning made it 6-2 Crusaders.

Youngstown State (14-33, 10-14 Horizon) scored three times in the bottom of the fifth, starting with a Valpo error.  John Koehnlein, who was 3-for-5 in the game, had a run-scoring single, as did Jeremy Banks, and Joe Iacobucci’s sacrifice fly made it 6-5.

“Frane did a great job today keeping the lead for us,” Woodson said.  “That was big for us.  Jarad got hit a bit, but got the save, which is all we needed.”

In the opener, the Penguins took advantage of three Valpo errors and jumped out to a 6-0 lead before the Crusaders could get on the scoreboard.  An opening inning error on a ground ball put Youngstown State on top.

The Penguins added four runs in the second, started with three singles and a ground out to produce the first run.  Derek Carr, who drove in three runs in the opener, had a two-run double and then scored on Koehnlein’s triple, making it 5-0 hosts.

Another error in the fourth made it 6-0 YSU before Valpo got its first run, and hit, of the game on a Kyle Gaedele (Arlington Heights, Ill./Rolling Meadows H.S.) homer.  Gaedele went 3-for-4 in game one, accounting for all but to Valpo hits.  The Crusaders added another run in the sixth, taking advantage of two hits batsmen and a walk, prior to a wild pitch.

Iacobucci homered in the bottom of the sixth and two hit batters, a sacrifice bunt, and a RBI single by Porter made it 8-2 Penguins.

Valpo added two late runs in the eighth on back-to-back homers by Andrew Quinnette (Kokomo, Ind./Kokomo H.S.) and O’Gara, but it was not enough.

Valparaiso (25-21, 10-10) will return to Emory G. Bauer Field on Sunday afternoon to begin a six-game regular season-ending homestand.  The twinbill against Butler begins at noon, with all the action carried live on WVUR (95.1-FM, Valparaiso) and online at www.valpoathletics.com.