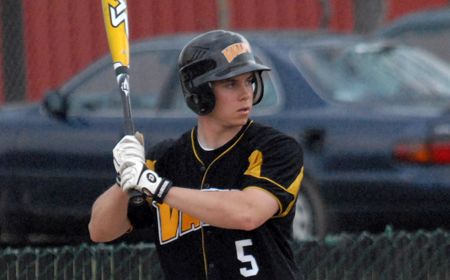 Dan DeBruin (Combined Locks, Wis./Kimberly H.S.) combined to go 5-for-8 with four runs scored in the twinbill while Matt Lenski (Milwaukee, Wis./Marquette University H.S.) went 3-for-5 with two doubles and four RBIs in the opener as the Crusaders moved a season-high six games over .500 (27-21, 12-10 Horizon), and within a half-game of second place in the Horizon League heading into the final week of regular season play.  Valpo has now won nine of its last 11 contests overall and is 17-6 since April 10.

“When DeBruin makes things happen at the top of the order, we go,” head coach Tracy Woodson said.  “It’s exciting where we’re at right now.”

In the opener, Butler (11-35, 6-16) jumped on top in the opening inning on a RBI single by Kyle Schultz.  After Valpo answered in the bottom of the inning with a run-scoring double by Lenski, the Bulldogs added five more runs over the next three frames to take a 6-1 lead.

Lenski’s second RBI double of the game in the fifth added Valpo’s second run, scoring DeBruin for the second time in the game.

The Crusaders tacked on three more runs in the seventh, starting with a run-scoring single by DeBruin.  Lenski’s RBI groundout plated DeBruin, and later in the inning, Ryan O’Gara (Buffalo Grove, Ill./Buffalo Grove H.S.) singled home Josh Wallace (Bellefountaine, Ohio/Bellefountaine H.S.), who had struck out but reached on a wild pitch with two outs.

Meanwhile, Steve Godawa (Buffalo Grove, Ill./Buffalo Grove H.S.) came on in relief in the fourth inning and pitched 4.2 innings of one hit ball.  He struck out three to earn the win (3-0) while Jarad Miller (Fort Wayne, Ind./Carroll H.S.) pitched a 1-2-3 ninth for the save.

“Godawa was the biggest key to us winning this game,” Woodson said.  “He held the game right where it was giving us the opportunity to make the comeback.”

DeBruin and Lenski both had three hits to pace Valpo’s 14-hit attack while Gaedele and McCormick each had two hits a piece.

Jamie Feldheiser suffered the loss (2-3) for Butler, which had 11 hits, including a 3-for-4 performance from Grant Fillipitch.

In game two, McCormick’s first round-tripper of the season to rightfield gave the Crusaders an early lead in the third inning.  Billy Cribbs (Rochester, Mich./Rochester H.S.) added to the lead in the fourth with a RBI double that plated Scoby.

Butler tied the game in the sixth, taking advantage of four walks and an infield single, two of the free passes with the bases loaded.  The Bulldogs then took the lead in the seventh on an error by the Crusaders.

Again Valpo rallied in the seventh.  Andrew Quinnette (Kokomo, Ind./Kokomo H.S.) had a RBI single to score DeBruin and Bo McClendon (Chesterton, Ind./Merrillville H.S.) scored on a passed ball to give the Crusaders the lead.  Scoby then added a two-run single with two outs for insurance on the way to Valpo’s third consecutive victory.

“We don’t give up when we get behind,” added Woodson.  “We had some big hits late.”

Matt Stucky (Fort Wayne, Ind./Concordia Lutheran H.S.) earned the win (2-0) in relief for the Crusaders while Miller notched his second save of the day and 16th of the season with another 1-2-3 ninth.

DeBruin and Scoby each had two hits as the Crusaders overcame three errors in the field.

Matt Sokolowski started and suffered the loss (1-6) for Butler, allowing four runs and five hits in 6.1 innings of work.

Valparaiso will next play an exhibition game against the Gary SouthShore RailCats on Tuesday night at the U.S. Steel Yard in Gary beginning at 6 p.m.