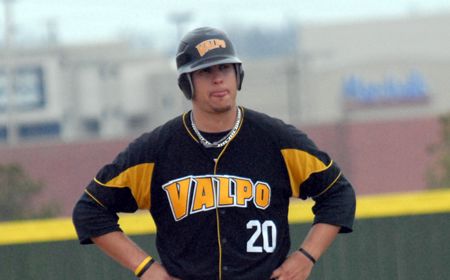 Eight Valparaiso pitchers limited the Gary SouthShore RailCats to just three hits on Tuesday evening, but the Northern League hosts came through with a run in the ninth to defeat the college boys 2-1 in exhibition action at the U.S. Steel Yard.

“We were pretty relaxed and into the game,” Valpo head coach Tracy Woodson said.  “I didn’t know what to expect.”

The game was designed to raise money for the Boys and Girls Club of Northwest Indiana, and the proceeds of $2,724 went to the organization.

Pitching dominated the early portion of the game as neither team was able to find the scoreboard in the first five innings.  Valpo hurlers Austin Siwiec (Aurora, Ill./Marmion Academy) and Matt Stucky (Fort Wayne, Ind./Concordia Lutheran H.S.) set the down in order in each of the first three innings.

Valpo finally broke through on the scoreboard in the sixth inning.  Steven Scoby (Delton, Mich./Kellogg H.S.) singled through the right side with one out and went to third on Billy Cribbs (Rochester, Mich./Rochester H.S.) bloop single to right.  Ranko Ivetic (Schererville, Ind./Lake Central H.S.) added the third straight Crusader hit, an infield single off the glove of RailCats’ pitcher Brad Halford to score Scoby.

Gary answered in the bottom of the sixth.  Cristian Guerrero led off with a single up the middle and Brett Wallace walked.  John Torres, pinch-running for Guerrero, and Wallace moved up 90 feet on a passed ball, and Torres scored on a groundout off the bat of Jeff Beachum.

The RailCats struck one last time in the bottom of the ninth, taking advantage of two walks and a hit batsman.  With one out, Isaac Omura’s fly ball over the heads of the Valpo outfielders drove in the winning run.

Valpo outhit Gary 6-3, despite using wooden bats as opposed to the aluminum ones during collegiate games.

“Our guys threw well and I’m excited about that,” added Woodson.  “We didn’t hit it that hard, but I expected that.  We tried to get everyone an at bat and all of our arms we needed to an inning on the mound.”

Valparaiso (27-21) will return to Emory G. Bauer Field on Wednesday afternoon to host Illinois State in a 3 p.m. contest to begin the final four-game homestand of the year to close out the regular season.