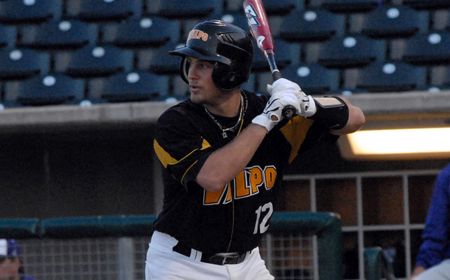 Matt Lenski had two hits for the Crusaders in the regular season finale. (Ray Acevedo)
UIC at Valparaiso | May 17, 2009
Related Links
Related Links

UIC scored two unearned runs on Sunday afternoon, including one in the 10th inning that proved to be the difference, as the Flames defeated Valparaiso 2-1 at Emory G. Bauer Field to wrap up the 2009 regular season for both schools.

UIC (26-21, 17-6), the Horizon League’s regular season champion, found the scoreboard first in the second inning.  With two outs, Andy Leonard walked, and came around to score on Tony Altavilla’s infield single when the attempt to throw Leonard out at third sailed wide.

Valpo tied the game with a run in the fourth.  Dan DeBruin (Combined Locks, Wis./Kimberly H.S.) led off with a bunt single and advanced to second on a sacrifice bunt by Kyle Muhlsteff (Yorba Linda, Calif./Esperanza H.S.).  Matt Lenski (Milwaukee, Wis./Marquette University H.S.) followed with a run-scoring double to the gap in left-center.

Crusaders hurlers kept the Flames off the board into the ninth when Valpo had a chance to win the game.  Lenski led off with a double and moved to third on a sacrifice bunt by Josh Wallace (Bellefountaine, Ohio/Bellefountaine H.S.).  Despite two intentional walks loading the bases, a foulout and groundout ended the threat.

The Flames won the game in the 10th inning.  A lead-off walk and a fielding error on a sacrifice bunt put two runners on and another sacrifice bunt moved them to second and third.  The Crusaders caught the runner on third trying to steal home on a squeeze attempt, but Brandon Harwell followed with a two-out single up the middle.

The Crusaders put the tying run on base in the bottom of the inning, but a double play ended the game.

“We didn’t execute when we needed to today,” head coach Tracy Woodson said.  “We had our chances.  We pitched well enough to win.”

DeBruin and Lenski each had two hits for the Crusaders as the Brown and Gold tallied just five on the afternoon.  Eight Valpo pitchers combined to limit the Flames to just four hits, but allowed the two unearned runs.  Austen Siwiec (Aurora, Ill./Marmion Academy) suffered the loss (0-2) while Derrick Miramontes earned the win (6-0) for UIC out of the bullpen.

Valpo now heads to the double elimination tournament that runs Tuesday through Sunday at The Pipe Yard in Lorain, Ohio as the number four seed.  Every game of the Crusaders’ run in the tournament will broadcast live on the internet through sportsjuice.com at www.valpoathletics.com.