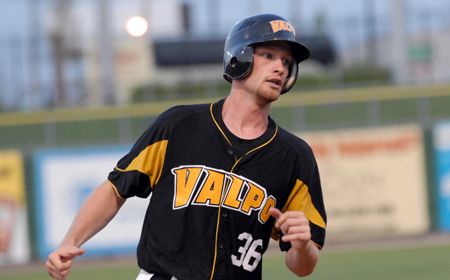 Valparaiso left 13 runners on base Wednesday afternoon, including eight in scoring position, and fell in its first game of the Horizon League Tournament against Cleveland State 4-2 at The Pipe Yard in Lorain, Ohio.

With the loss, the Crusaders fall into the loser’s bracket, and will face the loser of Wednesday’s second game between Butler and Wright State Thursday morning at 10 a.m. CDT.

“We didn’t swing the bats well at all today,” head coach Tracy Woodson said.  “We had chances to win the game but we didn’t hit the ball.”

The Crusaders threatened in the bottom of the third, putting runners on second and third with one out, but back-to-back strikeouts by Viking starter Josh Hungerman ended the threat.

Cleveland State (21-29) struck first in the top of the fourth inning.  Brad Buell led off the inning with a double to left and scored two batters later on a single by Ryan Franks.  The Vikings added to the lead in the fifth on a two-run double off the bat of Travis Miller to increase the lead to 3-0.

Valpo (27-23) put two more runners on in the fifth but failed to score before finally breaking through in the sixth.  With two outs, Damon McCormick (Louisville, Ky./Saint Xavier H.S.) drew a bases loaded walk to force home Josh Wallace (Bellefountaine, Ohio/Bellefountaine H.S.) and Dan DeBruin (Combined Locks, Wis./Kimberly H.S.) followed being hit by a pitch to bring in Steven Scoby (Delton, Mich./Kellogg H.S.).  The Crusaders stranded the bases loaded in the inning though after closing to within 3-2.

The Vikings added to their lead in the eighth on a single by Franks, scoring Buell for the third time in the game.  Valpo put runners on second and third in the ninth with one out but Miller, who came on in the inning to close out the game, got a ground ball and a flyout to end the game to earn his fourth save of the year.

Hungerman earned the win (5-6) allowing two runs and five hits while striking out eight in 6.2 innings for the Vikings.  Gulbransen suffered the loss (5-7), despite allowing just three runs and eight hits in seven innings of work.  He fanned six and did not walk a batter.

“Jon pitched well for the most part,” Woodson added.  “He got some balls up late though.”

Wallace was the only Crusader to tally two hits in the game, as Valpo managed just six on the afternoon.  Alex Johnson led Cleveland State’s 10-hit attack with a 3-for-4 day at the plate.