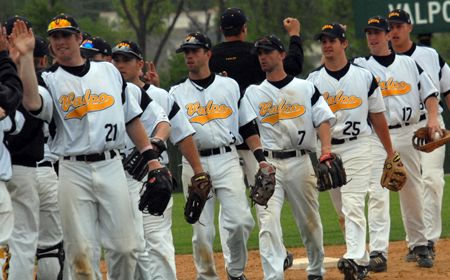 Bryce Shafer (Wabash, Ind./Northfield H.S.) pitched into the ninth inning, striking out seven and yielding just five hits as Valparaiso defeated Butler 4-2 in an elimination game on the Horizon League Tournament on Thursday afternoon at the Pipe Yard in Lorain, Ohio.

Shafer won his league-leading seventh game (7-3) of the season, walking just two in 8.1 innings of work.

“We needed this win and his performance,” head coach Tracy Woodson said afterwards.  “We still have a long way to go though, starting again tomorrow morning.  Shafer had a good slider going that was tough to hit today.”

In the opening two innings, Valpo continued its trend that started in the first round.  The Crusaders had runners on second and third with one out in the opening inning and stranded yet another runner in the second without scoring.

Butler broke through in the third with the first run of the game.  Jason Jamerson led off with a double to left and with two outs Grant Fillipitch singled through the right side.

The Crusaders answered in the bottom of the inning, driving in their first run of the tournament by putting a ball in play.  Dan DeBruin (Combined Locks, Wis./Kimberly H.S.) led off the inning with a single but was forced at second on a fielder’s choice off the bat of Damon McCormick (Louisville, Ky./Saint Xavier H.S.).  McCormick stole second, his second swipe of the day, and scored on a single by Josh Wallace (Bellefountaine, Ohio/Bellefountaine H.S.).

The middle innings turned into a pitcher’s dual between Valpo’s Shafer and Butler’s Matt Sokolowski.  Shafer did not allow a hit in the fourth through seventh innings while Sokolowski retired eight straight following David Klein’s (Aurora, Ill./Oswego East H.S.) single to lead off the fourth before he led off the seventh with his second hit of the day.

Klein’s single in the seventh sparked a late inning rally for the Brown and Gold.  After he was sacrificed to second, he moved to third on a wild pitch.  Kyle Gaedele (Arlington Heights, Ill./Rolling Meadows H.S.) drew a walk to put runners on the corners.  Pinch hitter Kyle Muhlsteff (Yorba Linda, Calif./Esperanza H.S.) laid down a perfect safety squeeze bunt that he beat out for a single, bringing home Klein with the go ahead run.  DeBruin followed with a hit-and-run single that scored Gaedele and put runners back on the corners.  After DeBruin stole second, Matt Lenski (Milwaukee, Wis./Marquette University H.S.) was intentionally walked to load the bases.  With Ryan Kruszka on in relief following the DeBruin hit, he unleashed a wild pitch to plate Muhlsteff, increasing Valpo’s lead to 4-1.

Two straight singles and a sacrifice fly by Kyle Schultz in the ninth made it a 4-2 Crusader advantage when Jarad Miller (Fort Wayne, Ind./Carroll H.S.) was summoned from the bullpen.  He struck out Alex Montagano before a caught stealing ended the game, giving Miller his 17th save of the season.

Klein and DeBruin each had two hits for the Brown and Gold as Valpo tallied 10 on the afternoon.  Fillipitch and Jamerson each had two of Butler’s (13-41) six hits on the day.

“Klein does the little things,” Woodson said.  “The kid wants to play and we decided to give him the chance today and it paid off.  As a team, we’re still struggling at the plate though, and striking out way too much.”

Valparaiso (28-23) will return to action on Friday morning in another elimination game, beginning at 10 a.m. against an opponent yet to be determined.  If the Crusaders win, they would play again at 2 p.m. CDT.

Tournament Notes: Valpo also faced Butler in the 2008 Horizon League Championships, winning 6-5 in the opening round … Klein’s two hits were his first multi-hit game of the season … Shafer was named the U.S. Army Player of the Game for his efforts.