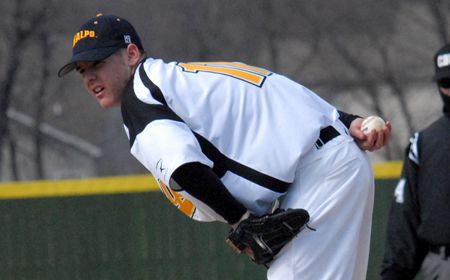 Bryce Shafer (Wabash, Ind./Northfield H.S.) went six strong innings for Valparaiso but McNeese State scored four times in the eighth and two more in the ninth as the Cowboys rallied to defeat the Crusaders 7-6 on Friday night at Cowboy Field in Lake Charles, La. in the season opener for both teams.

Shafer went six full innings, allowing just three hits and one run.  He did walk five and struck out seven.

“Bryce threw pretty well overall,” head coach Tracy Woodson said.  “He was pretty dominant.  We have got to hold onto the lead for him to get the win though.”

Valpo’s bats started early, with the Crusaders scoring in each of the first four innings.  Steven Scoby (Delton, Mich./Kellogg H.S.) led off the game with a single, moved around the bases, and scored on a groundout by Kyle Gaedele (Arlington Heights, Ill./Rolling Meadows H.S.).  Ryan O’Gara (Buffalo Grove, Ill./Buffalo Grove H.S.) added a solo homer with two outs in the opening inning to make it 2-0 Crusaders.

Corey Thibault (Tustin, Calif./Foothill H.S.) led off the second with a single, moved to second on a walk and third on a ground out.  A groundout by Damon McCormick (Louisville, Ky./Saint Xavier H.S.) scored the game’s third run.  Valpo added an unearned run in the third when Kyle Muhlsteff (Yorba Linda, Calif./Esperanza H.S.) reached on an error to lead off the inning and scored on a double by O’Gara.  A Scoby single with two outs in the fourth scored Karch Kowalczyk (Peru, Ill./LaSalle-Peru H.S.) gave the Crusaders a 5-0 advantage.

McNeese State found the scoreboard in the bottom of the fourth before Valpo added another run in the top of the eighth on a single by Robbie Robinson (Brea, Calif./Brea H.S.) which plated Gaedele.

With two outs in the eighth, reliever Justin Frane (Huntertown, Ind./Carroll H.S.) struck out Bryn Thompson, but the ball got away allowing him to reach safely.  The Cowboys then scored four times to pull within one, keyed by a three-run triple off the bat of Andy Riche.

A two-run double with one out in the ninth by Matt Fontenot won the game for the Cowboys.

O’Gara and Scoby each had two hits for the Crusaders to pace their seven-hit attack.  Riche had three hits, including the big triple, to pace McNeese State.

Jaden Dillon earned the win (1-0) for the Cowboys in relief, working the final five innings allowing just one run and one hit while striking out four.  Jarad Miller (Fort Wayne, Ind./Carroll H.S.) suffered the loss (0-1) for Valpo.

Valparaiso (0-1) and McNeese State will play game two of the three-game weekend series on Saturday afternoon with a 4 p.m. start.  Austen Siewic (Aurora, Ill./Marmion Academy) will take to the hill for  the Crusaders against the Cowboys’ Tyler Davis.