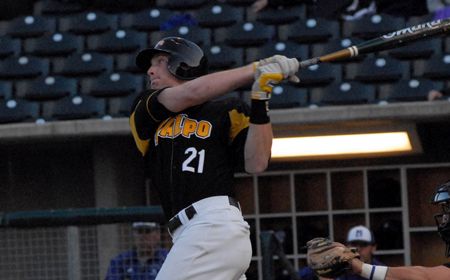 Valparaiso rallied from a six-run deficit to tie the game at nine, but #22/20 Oklahoma came through with three runs in the bottom of the eighth and defeated the Crusaders 12-9 on Friday afternoon in the opening game of the Jacksonville Tournament  played at Sessions Stadium in Jacksonville, Fla.

“We swung the bats well today,” head coach Tracy Woodson said.  “Gaedele hit a laser in the first and everyone contributed with the bats.”

Oklahoma answered with five runs in the bottom of the second, all of which came with two outs, and were unearned due to a Crusader error.  Garrett Buechele delivered the big hit, a grand slam to left, his second homer of the year.

“It’s frustrating when you make mistakes and they lead to runs,” Woodson added.  “In this case one error led to five.”

Valpo got one run back in the top of the third as Steven Scoby (Delton, Mich./Delton Kellogg H.S.) led off with a double to right and advanced to third on a wild pitch.  The sophomore scored on a groundout by Ryan O’Gara (Buffalo Grove, Ill./Buffalo Grove H.S.)

Two more Sooner singles and a walk contributed to two more Oklahoma runs in the third, and the Sooners tacked on two more in the fifth to build a 9-3 advantage before the Crusaders began their rally in the seventh.

The Crusaders loaded the bases with one out when Gaedele singled through the right side to plate two.  O’Gara followed with a double to right adding two more Valpo runs, giving the junior six runs batted in on the young season.  Will Hagel (Arlington Heights, Ill./Prospect H.S.) delivered a pinch hit single, his first collegiate RBI to bring the Brown and Gold within one, and a wild pitch tied the game at nine.

Oklahoma plated three runs in the eighth on four hits and two wild pitches which proved to be the deciding runs, as the Crusaders managed just one base runner in the ninth in their final comeback attempt.

Scoby, Gaedele, and O’Gara all had two hits each for the Crusaders to pace Valpo’s 10-hit attack, while Buechele was the only Sooner with two hits.  Oklahoma also had 10 hits in the game.

Bryce Shafer (Wabash, Ind./Northfield H.S.) started for Valpo, working five innings and allowing six hits and nine runs, only two of which were earned.  He did walk six and struck out two.  Justin Frane (Huntertown, Ind./Carroll H.S.) suffered the loss (0-1) in relief.

“Shafer didn’t have a great performance with six walks,” Woodson said.  “He was decent and we got him off the hook.”

Jeremy Erben (2-0) earned the win in relief for Oklahoma (5-0) with Ryan Duke picking up his third save of the year.

Valparaiso (0-4) will return to tournament play on Saturday as the Crusaders host Richmond.  First pitch is slated for 11 a.m. CST in Jacksonville.