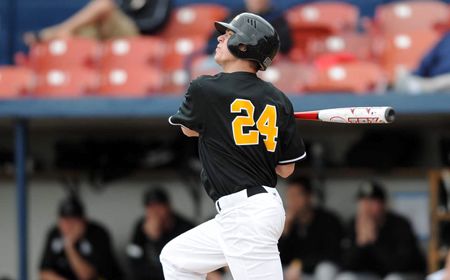 Valparaiso won its opening game on Tuesday afternoon at Chain of Lakes Stadium in Winter Haven, Fla. for the 1,100th victory in school history, defeating Saint Bonaventure 17-13. The Crusaders then dropped the night cap 16-8 against Maine.

In the opener against the Bonnies, the Crusaders fell behind 3-0 in the second before erupting for six runs in the bottom half of the frame.  Will Hagel (Arlington Heights, Ill./Prospect H.S.) started the uprising with his first collegiate homer while Kyle Gaedele (Arlington Heights, Ill./Rolling Meadows H.S.) added a two-run double in the inning.

Saint Bonaventure answered tied the game in the third before the Crusaders scored a pair in the bottom of the third to take an 8-6 lead.  An unearned run in the seventh made it 9-6 Valpo on a Robbie Robinson (Brea, Calif./Olinda H.S.) double before the Bonnies closed within one in the fifth following a homer and two doubles.

Valpo put up a three spot in the sixth on four hits, and added a run in the seventh, only to see Saint Bonaventure tie the game with two in the seventh and three in the eighth.

A single by Damon McCormick (Louisville, Ky./Saint Xavier H.S.) broke the tie in the eighth before Justin Frane (Huntertown, Ind./Carroll H.S.) plated two more with a double.  Gaedele added a single for the fourth run in the frame to cap the scoring.

McCormick (1-0) earned the victory in relief for the Crusaders while Jordan Crane suffered the loss (0-1) for Saint Bonaventure (0-4).

In the night cap against Maine, Valpo jumped on top 5-0 in the first two innings.  Gaedele had a two-run single in the second to cap a five RBI day for the sophomore.

The Black Bears cut into the lead with two in the second on a single and added five more in the third, including a pair of unearned runs, to take the lead, taking advantage of six walks as well.

Run-scoring singles by Ryan O’Gara (Buffalo Grove, Ill./Buffalo Grove H.S.), who extended his hitting streak to 10 straight games dating back to last season and a RBI ground out by Robinson tied the game in the third.

Maine took the lead with a single run in the sixth, the broke it open in the seventh with eight more, capped by a three-run homer by Michael Fransoso.  A Bo McClendon (Chesterton, Ind./Merrillville H.S.) single plated Valpo’s final run in the eighth.

Frane had four hits in the second game, giving him six on the day to lead Valpo’s 11-hit attack in the night cap.  Maine (2-5) got four RBIs each from Fransoso and Joey Martin while banging out 13 hits.

Justin Latta earned the win (1-0) for the Black Bears while Steve Godawa (Buffalo Grove, Ill./Buffalo Grove H.S.) suffered the loss (0-1) for the Brown and Gold.

“It has been tough for us to play in the 20-30 mile per hour winds the last three games,” head coach Tracy Woodson  “Our pitchers are better than what they have shown.” said.

Valparaiso (2-6) will return to action on Wednesday with a 2 p.m. CST contest against Western Michigan at Lake Myrtle Stadium in Auburndale, Fla.