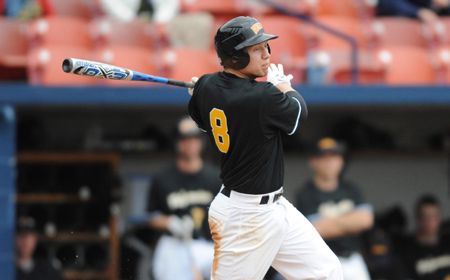 Valparaiso took an early 3-0 lead against #19/23 South Carolina on Tuesday evening at Carolina Stadium in Columbia, S.C., but the Gamecocks scored 10 times in the third inning, including eight unearned runs, and defeated the Crusaders 12-4 before 5,295 fans.

The Crusaders scored three times in the top of the second inning, aided by two South Carolina errors.  With runners on second and third, Damon McCormick (Louisville, Ky./Saint Xavier H.S.) laid down a bunt to score Billy Cribbs (Rochester, Mich./Rochester H.S.) and Justin Frane (Huntertown, Ind./Carroll H.S.) while reaching himself on a throwing error.  McCormick then stole second and scored on the second error of the inning.

Two walks, a hit batter, and an error set the stage for the big 10-run third inning for the Gamecocks.  Eight of the tallies were unearned as Brady Thomas delivered a two-run double and Adrian Morales added a three-run double.  Whit Merrifield capped the scoring with a two-run homer, giving South Carolina a 10-3 lead.

Valpo got a run back in the fourth as Karch Kowalczyk (Peru, Ill./La Salle-Peru H.S.) tripled and scored on a ground ball by McCormick, but South Carolina added two more in the eighth on the way to the victory.

Bryce Shafer (Wabash, Ind./Northfield H.S.) suffered the loss (1-1), pitching just 2.2 innings while allowing 10 runs, only two of which were earned.  He allowed four hits and four walks while striking out two.  Jon Gulbransen (Appleton, Wis./Fox Valley Lutheran H.S.) came out of the bullpen to pitch 4.1 innings of scoreless relief, striking out five.

Jose Mata came out of the bullpen to get the win (1-0), pitching six innings and allowing just two hits and one run.

Valpo managed just three hits on the evening, while Merrifield and Morales each had two of South Carolina’s nine hits.

Valparaiso (3-10) and South Carolina (7-4) will wrap up their two-game midweek series on Wednesday evening.  First pitch is slated for 1 p.m. CST at Carolina Stadium, with the start time moved due to forecasted inclement weather later in the evening.