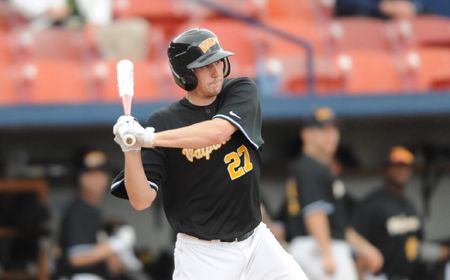 Justin Frane hit his first homer of the season to give Valpo a 3-2 lead in the fourth. (Dave Schofield)
Valparaiso at #19 South Carolina | March 10, 2010
Related Links
Related Links

Justin Frane (Huntertown, Ind./Carroll H.S.) hit a two-run homer in the fourth inning to give Valparaiso the lead, but #19/23 South Carolina responded by scoring in four straight innings on the way to a 7-3 victory over the Crusaders on Wednesday afternoon at Carolina Stadium in Columbia, S.C.

Trailing 2-1 heading into the fourth, Frane’s first round-tripper of the season to left-centerfield plated Ryan O’Gara (Buffalo Grove, Ill./Buffalo Grove H.S.) to give the Brown and Gold a one-run lead.

South Carolina responded with two unearned runs in the bottom of the inning, scoring both on a throwing error with two outs in the frame.  The Gamecocks added single runs in each of the next three innings to secure the victory.  A sacrifice fly in the fifth and an unearned tally in the sixth helped expand the advantage before a two-out single in the seventh by Robert Beary plated the final run.

The Gamecocks took the lead in the second, scoring on a passed ball and a single by Whit Merifield before Valpo rallied in the fourth.

Matt Price earned the win (1-0) for the Gamecocks, allowing just one hit in four innings of work out of the bullpen while striking out eight.  Will Robinson (Placentia, Calif./Valencia H.S.) suffered the loss (0-4) for the Crusaders, allowing five runs and five hits while walking five in five innings of work.

Valparaiso managed just two hits in the game against South Carolina hurlers, the homer by Frane and a one-out single by Damon McCormick (Louisville, Ky./Saint Xavier H.S.) in the seventh inning.

Brady Thomas led South Carolina (8-4) with two of the Gamecocks nine hits on the afternoon.

“It was the same thing yet again today,” head coach Tracy Woodson said.  We gave away runs with a couple of errors.  We were not aggressive at the plate, striking out 18 times which is really disappointing.”

Valparaiso (3-11) will head to Boiling Springs, N.C. on Friday afternoon to begin a three-game weekend series against Gardner-Webb.   First pitch is slated for 4 p.m. CST.