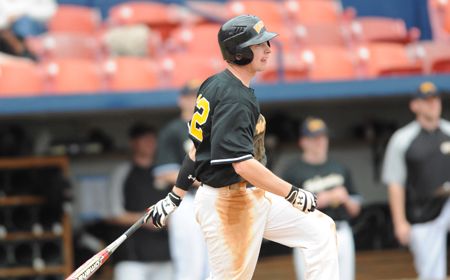 Despite being delayed by more than two hours at the start due to rain, Valparaiso completed a weekend sweep of Chicago State, defeating the Cougars 16-4 on Saturday afternoon at Emory G. Bauer Field.

“We swung the bats again today and hopefully this is something that can carry over into the coming weeks,” head coach Tracy Woodson said.  “It’s always good to sweep a series and build some momentum.”

Valpo utilized four of its 10 extra base hits on the day to score the game’s first four runs in the second inning.  A triple by Cribbs brought home the first run and Karch Kowalczyk (Peru, Ill./La Salle-Peru H.S.) followed with a run-scoring double.  Another double by Kyle Muhlsteff (Yorba Linda, Calif./Esperanza H.S.) drove in his first of four RBIs and Frane followed with his fourth triple of the weekend.

The Crusaders exploded for seven more runs in the third, keyed by two-run homers by Muhlsteff and Paul Heinkel (Fond du Lac, Wis./Winnebago Lutheran Academy).  Gaedele also led off the inning with a round-tripper as Valpo built an 11-0 lead.

After the Cougars got on the scoreboard in the fourth with a solo homer by William Hill, who went 3-for-4 on the day, Valpo batted around for the second straight inning, adding five more runs.  Four straight hits to start the inning plated two runs and a Muhlsteff sacrifice fly added the third.  Bo McClendon (Chesterton, Ind./Chesterton H.S.) added a two-run pinch-hit single to cap the Crusaders scoring.

Meanwhile, Tyler Deetjen (Saint Charles, Ill./East H.S.) was strong on the mound for the Brown and Gold.  He struck out nine Cougars in the first four innings on his way to a career-high 10 on the afternoon.  He worked 5.2 innings allowing eight hits and four runs while walking just two.

“Deetjen was very good,” Woodson said.  “He started to tire late and left a couple balls up which led to the late runs, but otherwise was very solid.”