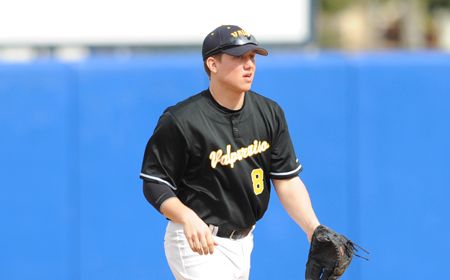 Valparaiso’s baseball team continued its hot hitting attack on Monday afternoon, scoring double figures for the fourth straight games as the Crusaders ran their win streak to a season-high four with a 14-6 victory over Wabash at Emory G. Bauer Field.

The Crusaders pounded out 18 hits, then 10th time in the last 11 games the Brown and Gold has had 10 or more in a contest.  Karch Kowalczyk (Peru, Ill./La Salle-Peru H.S.) went 4-for-5 with four runs batted in while Kyle Muhlsteff (Yorba Linda, Calif./Esperanza H.S.) had four hits in six at bats.  Robbie Robinson (Brea, Calif./Olinda H.S.) drove home four runs with his three-hit day as well.

“We swung the bat really well today,” head coach Tracy Woodson said after the game.  “We got lots of two-out and two-strike hits which we need to do.”

Valpo struck first in the opening inning.  Jon Gulbransen (Appleton, Wis./Fox Valley Lutheran H.S.) drew a two-out bases loaded walk and Robinson followed with a two-run single to make it 3-0 Crusaders.  The Brown and Gold added to the lead in the third, again with two outs.  Two straight walks followed by a Kowalczyk single plated the fourth run while Damon McCormick (Louisville, Ky./Saint Xavier H.S.) and Muhlsteff followed with a single and double respectively, increasing the advantage to six.

“Muhlsteff continues to hit the ball well and Karch had a couple of big hits,” Woodson added.

David Klein (Aurora, Ill./Oswego East H.S.) added a run-scoring double in the fourth and Kowalczyk came through again with a two-out hit to make it 8-0 Valpo.

Wabash (11-13) got on the scoreboard in the sixth on a double by Montana Timmons, who went 3-for-3 on the day for the Little Giants.  Timmons then scored on a single by David Seibel to cut the Crusader lead to 6-2.

Valpo responded with four more runs in the bottom of the inning, including a two-RBI double by Kowalczyk.  Muhlsteff added a two-out solo homer to left, his fourth of the campaign.  A two-run double by Robinson in the seventh increased Valpo’s advantage to 14-2 before the Little Giants scored four in the eighth to close the scoring.

Bryce Shafer (Wabash, Ind./Northfield H.S.) started and went 5.1 innings for the win (3-3) for the Crusaders, allowing two runs and eight hits.  He did not walk a batter and struck out seven.  Four Crusader relievers got the final 11 outs to secure the win.

“Jarad Miller (Fort Wayne, Ind./Carroll H.S.) came in (in the ninth) and was just filthy to close out the game,” concluded Woodson.

Keegan Leckrone started and suffered the loss (2-3) for Wabash, allowing six runs and six hits in three innings.  He walked five and struck out two.

Valparaiso (9-16) will look to extend its winning streak to five on Tuesday afternoon, heading to West Lafayette, Ind. to face Purdue.  First pitch is set for 3 p.m. CDT.