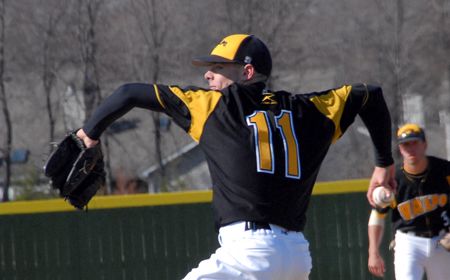 Valparaiso scored two runs in the 10th inning of game one and Bryce Shafer (Wabash, Ind./Northfield H.S.) tossed a two-hitter over eight innings in game two as the Crusaders swept a doubleheader from Youngstown State 6-4 and 4-0 on Saturday afternoon at Eastwood Field in Niles, Ohio to open Horizon League action.

“We did the little things to win today,” head coach Tracy Woodson said.  “We pitched well and got some big two-out hits.  Overall we did what we needed to win two games.”

Valpo won its Horizon League opener for the third straight year after joining the conference prior to the 2008 season.  The Crusaders jumped on top in the opening inning as Kyle Muhlsteff (Yorba Linda, Calif./Esperanza H.S.) led off the game with an infield single.  He moved to second on a walk and third on a fielder’s choice error by the Penguins.  A fielder’s choice RBI off the bat of Kyle Gaedele (Arlington Heights, Ill./Rolling Meadows H.S.) put Valpo in front.  The Crusaders looked to do more damage in the inning, but left the bases loaded.

Youngstown State scored a pair in the third to take the lead as Derek Carr led off the inning with a single and moved to third on a double by C.J. Morris.  Carr scored on a sacrifice fly while one batter Morris crossed the plate on a groundout.

A two-out single in the fifth by Paul Heinkel (Fond du Lac, Wis./Winnebago  Lutheran Academy) scored David Klein (Aurora, Ill./Oswego East H.S.) and Gaedele, putting the Brown and Gold back on top.  The lead would last for an inning before the Penguins tied the game in the sixth.

The Crusader took the lead 4-3 in the eighth with a two-out rally.  Damon McCormick (Louisville, Ky./Saint Xavier H.S.) was hit by a pitch with two outs and stole second.  He then scored a batter later as Muhlsteff delivered a single to center.

Valpo starter Jon Gulbransen (Appleton, Wis./Fox Valley Lutheran H.S.) took the lead into the bottom of the eighth, but hit a batter, gave up a single, and a sacrifice bunt to put up runners on second  and third with one out.  Gulbransen’s final line showed him allowing four runs and eight hits while striking out four.  The Crusaders summoned the bullpen and closer Jarad Miller (Fort Wayne, Ind./Carroll H.S.) got the first hitter to preserve the one-run lead.  However, a two-out wild pitch allowed the Penguins to tie the game.

Both teams went scoreless in the ninth before the Crusader broke through in the tenth to win.  With Youngstown State starter Aaron Swenson finally removed from the game after pitching nine innings allowing just four runs and seven hits while striking out seven, Valpo went to work.  A walk to Billy Cribbs (Rochester, Mich./Rochester H.S.) and a single to Karch Kowalczyk (Peru, Ill./La Salle-Peru H.S.) put runners on the corners with one out.  McCormick laid down a great squeeze bunt to plate Cribbs with the go-ahead run.  After a walk to Muhlsteff, Justin Frane (Huntertown, Ind./Carroll H.S.) delivered a single to add an insurance run for the Brown and Gold.

Miller returned for the 10th to set the Penguins down one-two-three to earn the victory (1-2), working 2.2 innings without allowing a base runner and striking out two.  Kevin McCulloh suffered the loss (0-3) in relief for the hosts.

Muhlsteff, Frane, and Kowalczyk each had two hits as part of a nine-hit attack for the Crusaders in the win.  Carr went 3-for-4 to lead Youngstown State in the opener.

Game two was all Shafer.  The junior struck out 13 Penguins, including at least one in every inning, to earn the victory (4-3) for the Crusaders.  He scattered just two hits, one in the first and one in the fourth, and worked around five walks while not allowing a baserunner past second base.

“Shafer was just outstanding today,” Woodson concluded.  “He had it going.”

Valpo jumped on the scoreboard in the second with an unearned run as Gaedele reached second on an error and scored on a Robbie Robinson (Brea, Calif./Olinda H.S.) single through the right side.  Gaedele also scored the Crusaders’ second run in the fourth on a sacrifice fly by Heinkel.

The Crusaders added a pair of insurance runs in the seventh.  McCormick and Gaedele were double stealing second and third, and when the throw to third went wild, McCormick raced home.  Gaedele then scored on a double by Klein, giving Shafer all the runs he would need.

Miller came on for the second time Saturday in game two to pitch the ninth, walking the first batter before sending the next three down in order.

Frane was the only Crusader to have a multi-hit effort in the night cap, as Valpo made the most of its seven hits.

Phil Klein took the loss (2-1) for the Penguins in game two, surrendering four runs, three of which were earned, and six hits in seven innings.

Valparaiso (11-17, 2-0 Horizon), winners of six of its last seven, will wrap up its three-game weekend series with Youngstown State (13-14, 4-4) on Sunday.  First pitch is set for 10 a.m. CDT at Eastwood Field.  Tyler Deetjen (Saint Charles, Ill./East H.S.) will take the mound for the Crusaders against the Penguins’ Blake Aquadro.