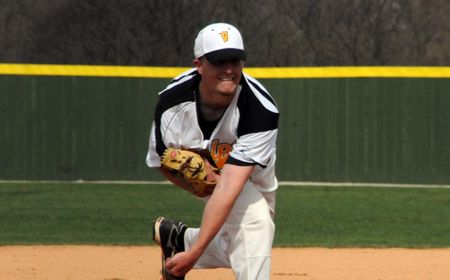 Gulbransen struck out six and walked just one on the afternoon to earn the win (3-2) as the Crusaders moved to 3-1 in Horizon League play for the first time since joining the league prior to the 2008 season.

“We got a ‘w’,” head coach Tracy Woodson said.  “That’s the most important thing.  Gulbransen was just outstanding.  I don’t even think he had his best stuff, but we made some plays and turned some double plays to get out of innings.”

Cleveland State tied the game in the third with three singles, the last by Shaffer plating Josh Lowe.

The Crusaders took the lead for good in the fifth with three runs on just two hits.  Viking starter Anthony Sambula hit the first two batters of the inning.  Following a sacrifice bunt by Muhlsteff, Justin Frane (Huntertown, Ind./Carroll H.S.) delivered a two-run single to put Valpo in front.  Gaedele followed with a triple to center, plating Frane and making it 4-1 Crusaders.

A Tyler Wynn double in the sixth scored Shaffer with the Vikings second run of the game, but that would be all they could manage on the afternoon against Gulbransen.

A three-run seventh gave Valpo some breathing room as the Crusader took advantage of a pair of walks and the third Viking error of the game.  A Gaedele single in the eighth scored Valpo’s final insurance run as the Crusaders took the opener of the three-game weekend series.

“Our offense took advantage of some of their mistakes which is the key,” Woodson said.  “We also got some big hits today.”

Sambula suffered the loss (4-4) for Cleveland State, working 6.1 innings and allowing eight runs, six of which were earned, and eight hits.  He struck out four and walked two.