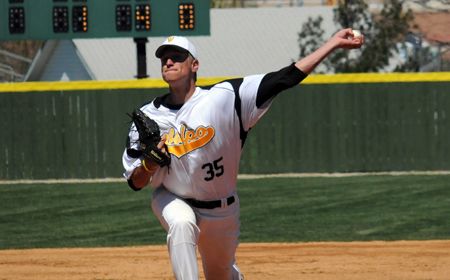 Deetjen’s 14 strikeouts marked a career high for the sophomore, and matched the team’s high this season with Bryce Shafer (Wabash, Ind./Northfield H.S.), who came on to earn his first collegiate save in the game.  Deetjen allowed seven runs, six of which were earned, and nine hits, but walked just two for the win (3-2).

Gaedele paced Valpo’s offensive attack.  He went 3-for-4 with a sacrifice fly, the six runs batted in, and scored a run.  He now has a team-leading 53 RBIs on the season.

“Gaedele took advantage of his RBI opportunities,” Woodson added.  “Overall we did some good things today.”

Valpo jumped on top in the opening inning.  Four straight singles, including run-scoring hits by Gaedele and Robbie Robinson (Brea, Calif./Olinda H.S.) put the Brown and Gold on top 2-0 before the first batter was retired.  Justin Frane (Huntertown, Ind./Carroll H.S.) added a RBI single and David Klein (Aurora, Ill./Oswego East H.S.) added another run on a fielder’s choice, putting the Crusaders on top 4-0.

An error and a hit batsman put runners on base for Valpo again in the second and Gaedele drove both runners home with a single into centerfield.  Gaedele’s sacrifice fly in the fourth then made it 7-0 Valpo.

Northern Illinois (19-28) got on the scoreboard in the fifth on a two-out single by Brian Riegler and added two more runs in the sixth, also with two outs.

A Steven Scoby (Delton, Mich./Delton Kellogg H.S.) sacrifice fly in the sixth pushed Valpo’s lead to 8-3 before the Huskies tried to rally in the eighth.  Nine batters came to the plate as Northern Illinois scored four times, closing within 8-7.

Valpo tacked on a pair of insurance runs in the eighth on a single up the middle by Gaedele, through a drawn in infield.  He scored Kyle Muhlsteff (Yorba Linda, Calif./Esperanza H.S.), who doubled to tie the school’s single season two-bagger mark with 21, as well as Scoby.

Muhlsteff went 3-for-3 for the Crusaders while Scoby was 2-for-2 with two sacrifices and a hit by pitch as the top three in the Valpo lineup combined to go 8-for-9 with seven runs scored and seven RBIs.  Frane also had a two-hit game as Valpo had 13 total hits on the afternoon.

Joe Buonavolanto and Jordin Hood each had three hits for the Huskies as part of their 13-hit attack.

Brian Smith suffered the loss (0-3) on the hill, allowing seven runs and seven hits in four innings of work.

Valparaiso (20-27) will return to the diamond on Wednesday evening for an exhibition game against the Gary SouthShore RailCats, a professional independent league team.  First pitch is set for 6 p.m at U. S. Steel Yard in Gary, Ind.  Tickets are $5 with proceeds benefitting the Boys and Girls Clubs of Northwest Indiana.  The Crusaders then close out the home portion of the regular season on Friday afternoon with a Senior Day doubleheader against Youngstown State.  First pitch is set for 12 p.m. at Emory G. Bauer Field.