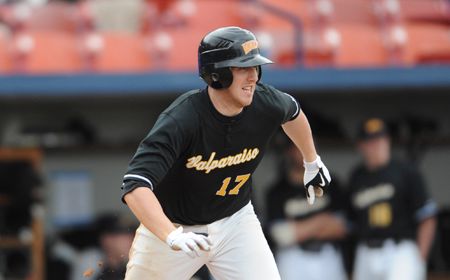 After dropping game one of Friday afternoon’s doubleheader with Youngstown State 15-5, Valparaiso’s bats exploded in game two as the Crusaders defeated the Penguins 14-3 to earn a split of the twinbill on Senior Day at Emory G. Bauer Field.

“We needed that second game,” head coach Tracy Woodson said.  “We came back strong swinging the bats and kept adding to our lead in game two.”

Valpo fell behind to begin the nightcap as back-to-back Penguin doubles and a sacrifice fly gave the visitors a 2-0 lead in the third.  The Crusaders immediately responded though, batting around in the bottom of the inning, sending 10 men to the plate while scoring six times.

Kyle Gaedele (Arlington Heights, Ill./Rolling Meadows H.S.) delivered a two-run single and Ryan O’Gara (Buffalo Grove, Ill./Buffalo Grove H.S.), who had been out of the lineup since March 20, returned and delivered a two-run hit as well.  Robbie Robinson (Brea, Calif./Olinda H.S.) followed with a run-scoring double and Will Hagel (Arlington Heights, Ill./Prospect H.S.) added a RBI single as the Crusaders took a 6-2 lead.

The Crusaders added to their advantage in the fourth as Justin Frane (Huntertown, Ind./Carroll H.S.) and O’Gara both delivered RBI hits, increasing the lead to seven runs.  Kyle Muhlsteff (Yorba Linda, Calif./Esperanza H.S.) got in on the RBIs in the fifth when his single plated Steven Scoby (Delton, Mich./Delton Kellogg H.S.).

Valpo blew the game open in the sixth, scoring four more times to increase the advantage to 13-2.  Gaedele led off the inning with a homer deep to left.  Scoby added a two-run single and the final run scored on a Penguin fielding error, their second miscue of the inning.

Youngstown State (21-28, 8-8 Horizon) added a run in the eighth, which the Crusaders immediately answered in the bottom of the inning.  Frane lifted a bases loaded sacrifice fly to right to score Scoby with the game’s final run.

Youngstown State jumped out to a quick lead in the opener.  A two-run single by Joe Iacobucci and a three-run homerun by C.J. Morris made it 5-0 Penguins after one.  Eric Marzec’s three-run triple in the second pushed the advantage to 8-0 before the Crusaders found the scoreboard.

O’Gara, in just his second at bat returning from his injury, launched a two-run homer to right-center, Valpo’s first hit of the game.

The Penguins added solo homers by Jeremy Banks in the fifth and Tom Clayton in the sixth in addition to another unearned run in the inning before adding three more in the seventh.

Robinson’s two-run homer in the seventh as well as Muhlsteff’s RBI double, which set the school’s single season record with 22 for the campaign, closed out Valpo’s scoring.  Jacke Healey, who went 4-for-6 in the game, added a solo homerun for the Penguins in the ninth.

Muhlsteff, O’Gara, and Robinson each had two hits to pace Valpo’s offense while Youngstown State banged out 18 in game one.

Valparaiso (21-28, 8-8) will hit the road for its final five games of the regular season, beginning on Monday afternoon with a doubleheader against Butler in Indianapolis, Ind.  First pitch is set for 12 p.m. CDT.