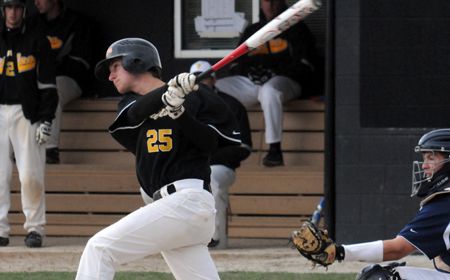 Playing in an elimination game for the first time in the 2010 Horizon League Baseball Championship presented by U.S. Army, Valparaiso scored eight times in the first three innings on the way to a 10-5 victory over UIC on Friday afternoon at U. S. Steel Yard in Gary, Ind.

The Crusaders, which had dropped 15 straight games dating back to 2002 against the Flames prior to a game one win in last Saturday’s doubleheader, defeated UIC (24-30) for the second time in three contests, and eliminated them from the tournament.

The Crusaders jumped on top in the second inning scoring six times, sending 10 batters to the plate in the inning while doing all of the damage with two outs.  Freshman Andrew Bain (Indianapolis, Ind./Park Tutor H.S.) delivered a bases loaded single to center after fighting off several two-strike pitches, plating Robbie Robinson (Brea, Calif./Olinda H.S.) and Will Hagel (Arlington Heights, Ill./Prospect H.S.), both of whom had singled.  For Bain, the single came in his first at bat in the tournament.

“That (Bain’s hit) started it.  All 6 runs came with two outs, and basically it was Andrew Bain that was 0-2 in the count, battled, and got a base hit,” Valpo head coach Tracy Woodson said.  “We’re sitting here saying 'bases loaded, one out, and we're not going to score' and then boom, boom, boom...some hits and we scored six runs.”

Kyle Muhlsteff (Yorba Linda, Calif./Esperanza H.S.) followed with a single to right, scoring Karch Kowalczyk (Peru, Ill./La Salle-Peru H.S.), who had walked to load the bases originally.  Justin Frane (Huntertown, Ind./Carroll H.S.) increased the lead to 4-0 Valpo with an infield single to short, and Bain came home.  Kyle Gaedele (Arlington Heights, Ill./Prospect H.S.) capped the scoring in the inning with a double into the gap in right-centerfield.

The Valpo defense helped maintain the advantage in the bottom of the second, as the Flames’ Andy Leonard laced a line drive straight at Bain at second with one out and two runners on, and Bain doubled off Chris Rutta at second to end the inning.

“We told them, this game is not over,” Woodson said.  “We had guys saying that it's not over, keep adding on.  We (the coaches) start panicking more than the players because we've seen this team (UIC) score a lot of runs, and I don't know if the kids realize that as much as we do."

Charlie Weinberg relieved UIC starter Michael Heesch to start the third inning and Robinson greeted him on the first pitch with a double into the gap in left-center.  Hagel followed with a double to the opposite gap, scoring Robinson, and advanced to third on a sacrifice bunt.  Steven Scoby (Delton, Mich./Delton Kellogg H.S.) then plated Hagel with a single into left, making it 8-0 Crusaders after two-and-a-half innings.

UIC cut into the Valpo advantage in the bottom of the third.  Ty Rubio and Steve McGuiggan led off the inning with back-to-back singles and scored on a triple to the deepest part of the ball park in centerfield off the bat of Jason Ganek.  A sacrifice fly by Matt Serna made it 8-3 Valpo after three innings.

Valpo added a run back in the top of the fifth, taking advantage of a pair of Flame errors.  With the bases loaded, courtesy of a walk and the two miscues, Kowalczyk drew a walk to score Ryan O’Gara (Buffalo Grove, Ill./Buffalo Grove H.S.).

The Flames cut into the lead again in the fifth.  Four straight singles, including back-to-back RBI hits by Serna and Nathan Orf pulled UIC within 9-5.

The Crusaders tacked on another run in the seventh.  Robinson led off with a single, his fourth hit of the day.  Kowalczyk added a hit with one out, before David Klein (Aurora, Ill./Oswego East H.S.) came through with a RBI single to make it 10-5 Valpo

Damon McCormick (Louisville, Ky./Saint Xavier H.S.) did the rest for Valpo, as the Crusader starting pitcher went the distance for the victory (7-1), striking out seven while not walking a batter.  It was the second straight game Brown and Gold hurlers did not walk an opposing hitter.

“We've already told him (McCormick) next year he's going to be in the rotation,” Woodson said.  “We've got players coming in where we can limit his playing time on the field and focus on pitching.  He's got good stuff.  He's a bulldog, he wants the ball.”

Robinson was named the U.S. Army Player of the Game after going 4-for-5 while scoring three times.  Hagel and Frane each had two hits as well, as the Crusaders pounded out 15 on the afternoon.

Heesch suffered the loss (6-6) for UIC, allowing six runs and six hits in just two innings on the hill.  McGuiggan went 4-for-5 with two runs scored while Ganek had a three-hit contest for the Flames.

With the win, Valparaiso (24-31) will return to the diamond on Saturday morning to face Milwaukee, a 1-0 loser against Wright State on Friday night, at 11 a.m.  The winner of that game then faces Wright State in the first championship game at 3 p.m.  Every game in the tournament can be viewed online live through the Horizon League Network.  Saturday’s games also can be heard live on WVUR (95.1-FM, Valparaiso).